Britain pins high hopes on its four Roses of Tralee

FOUR young ladies representing Derby, Manchester, Nottingham and Scotland will carry the hopes of their respective regions at the Rose of Tralee International Festival this weekend.

The British Roses aim to end a three-year wait to bring the Rose of Tralee tiara back across the Irish Sea when the contest reaches its finale on August 19.

Among them Derby’s Rose, 22-year-old Aoife Broderick, has taken a break from studying for a Masters in Real Estate at the University of Reading to take her place in the Co. Kerry final of the international competition.

Scotland’s 23-year-old Rose Michelle Kelly, who works as an auditor with PwC, is also in Ireland for the grand finale. 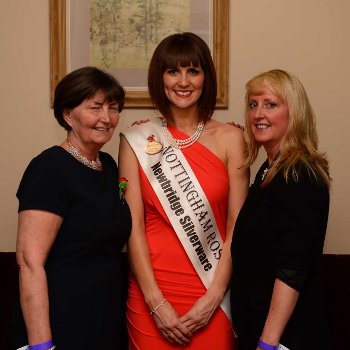 Nottingham Rose Claire Regan with mum Anne and her aunt Maria, who are also both former Roses

And as Nottingham Rose Claire Regan makes her bid for the title this weekend, she follows in footsteps trodden by her mother and aunt before her. Claire is the daughter of the 1977 Nottingham Rose Anne Stanley, while her aunt Maria Stanley represented Midlands UK in Tralee in 1990.

Seven Roses representing centres in Britain have been crowned the Rose of Tralee since the event began 55 years ago.

The Rose of Tralee International Festival will take place from August 15-19 with the two televised Rose Selections on RTÉ One on Monday 18th and Tuesday 19th at 8pm each night. The selections will be streamed live on www.rte.ie/player on both nights.

Details of when Claire, Michelle, Máiréad and Aoife will appear on stage with TV Host Dáithí Ó Sé will be announced on the Rose of Tralee Facebook page and www.roseoftralee.ie on Sunday, August 17 at 4.30pm