The Collins brothers: The Irish family that lost five sons in World War I honoured at last

THE ROYAL British Legion and the Irish Defence Force have collaborated to commemorate six sons of Waterford who fought in World War One.

Agnes Collins of Phillip Street, Waterford bore eight sons to her husband Thomas, who eventually left the family and placed the burden of raising the youngest of the children on Agnes’ shoulders.

When the Great War broke out in 1914, six of Mrs Collins’ sons enlisted to fight in the British Army.

16-year-old Stephen Collins was the youngest of the brothers to enlist, and was killed only two months into the war in Flanders, sometime in October 1914.

In 1915, Stephen’s 24-year-old brother Michael was also killed in Flanders while fighting for the Royal Irish Regiment – the same regiment for which Stephen had laid down his own life.

In September 1916, their 22-year-old brother John perished at the infamous Battle of the Somme while fighting with the Royal Munster Fusiliers.

The family’s eldest son – 30-year-old Patrick Collins – was later killed in March 1918 while fighting for the Royal Engineers, only eight months prior to Armistice Day.

A fifth brother, Joseph, was missing presumed dead after sustaining serious injuries on the Eastern Front.

After receiving five separate telegrams informing her of the grave news, Mrs Collins was informed that William – presumed at that time to be her only surviving son – would be sent home on compassionate grounds.

The story is strikingly similar to Steven Spielberg’s 1998 war movie Saving Private Ryan, which tells of the last survivor of four brothers enlisted in the US Army during World War Two. 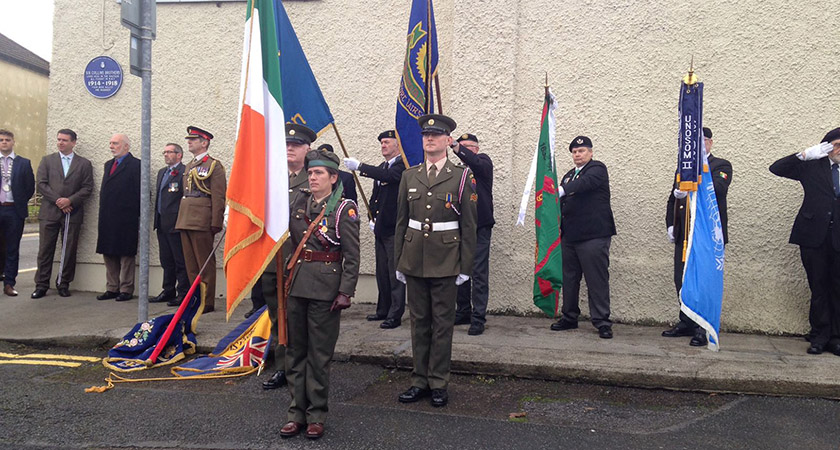 A commemorative plaque to the brothers was inaugurated in Waterford

A century after their sacrifice, the Collins brothers were honoured by their home city in Ireland for the very first time in 2016.

Waterford Civic Trust were joined by the British Legion in the unveiling of a blue plaque at the site of the family’s former home on Phillip Street.

Eighty members of the Collins family gathered for the commemoration to their tragic ancestors, along with the Mayor of Waterford Adam Wyse, Colonel Max Walker of the British Legion and Fine Gael politician John Deasy.

Mr Deasy described the effect of World War One on Waterford as “carnage”, and paid tribute to the sacrifice of the family which lost so many.

“I think a little bit of equilibrium has been brought to the memories of those people who died in the First World War from Ireland,” he said.

1,136 men from Waterford died while fighting for the British Army in World War One, but they weren’t always remembered as heroes.

Speaking to The Irish Post, Joseph Collins’ granddaughter Theresa explained that the reception for returning Irish soldiers in the British army changed particularly after the 1916’s Easter Rising.

“My great grandmother Agnes was given a King’s Pardon because they thought that she had suffered enough, having lost four sons and at that time possibly five,” she said.

“When they repatriated William and brought him back home to her after the deaths of the other brothers, things had changed in Ireland by that time.

“William was looked on as a traitor for having joined the English to fight the war. He didn’t have a particularly nice time of it after he returned to Ireland, to say the least.

“It made the ceremony in Waterford all the more touching. It was very emotional and humbling to say the least”.