CORK FANS attending future GAA matches have been banned from bringing Confederate flags at the risk of having them confiscated.

Cork GAA chairperson Tracey Kennedy has confirmed that the flags will not be allowed on the grounds, with stewards under instructions to confiscate any that they see.

Confederate flags are a common enough sight at matches where Cork are playing, as fans tend to bring flags from any country that have the colour red, including Switzerland and the United States. 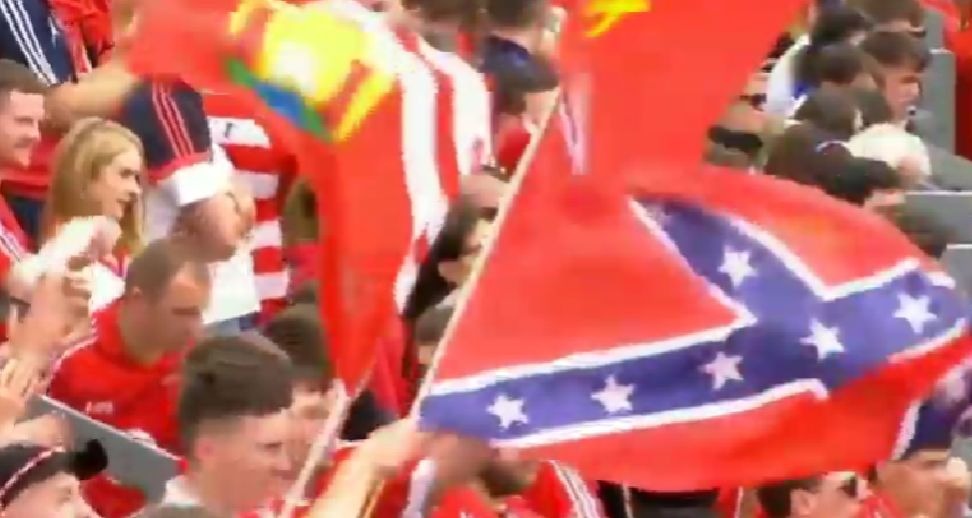 It also boasts the nickname of 'The Rebel County', and some may identify with the losing side in the American Civil War, who have held on to their Confederate flag with pride.

While defenders of the Confederate flag say it symbolises nothing more than southern pride, its critics say it represents what the Confederate army were fighting for: namely, to keep slavery, and the brutal racism which continued for decades following the war.

Chairperson Tracey Kennedy told The Irish Times that "As far as I'm concerned, the Confederate flag is banned".

Her predecessor Ger Lane had previously publicly urged fans not to fly the flag in 2017 following a far-right rally in Charlottesville, Virginia in which a counter protester was killed, and Ms Kennedy said this would now be enforced.

"Ger’s statement in 2017 was very clear when he asked our supporters not to bring the flag to our grounds, not to use the flag, so as far as I’m concerned, it's banned," she told the outlet.

"I’m happy to make that position explicit and say it’s banned from our grounds. It has no place in our grounds or in supporting Cork teams.

"We’re a community association and every part of the community is welcome in the GAA."

Earlier this week in the US, NASCAR announced that the Confederate flag would no longer be welcome at any of their races or events, saying it "runs contrary to our commitment to providing a welcoming and inclusive environment".