D-Day veteran, 97, reunited with long-lost French sweetheart, 92, over 75 years after they fell in love during World War II

AN American D-Day veteran and a French pensioner have been reunited 75 years after they fell in love during World War II.

In 1944, US soldier K.T. Robbins met Jeannine Ganaye while he was stationed in northeastern France and the two quickly became lovers.

But the pair lost touch after Mr Robbins had to leave in a hurry when he was reassigned to the frontline, leaving them both wondering whether they would ever meet again.

Mr Robbins, now 97, kept a black-and-white photograph of his long-lost sweetheart and showed it to journalists from French broadcaster France 2 while they were filming a recent report on veterans in the United States.

When the veteran travelled to Europe for ceremonies commemorating the 75th anniversary of D-Day earlier this month, the reporters gave him an incredible surprise – Jeannine was still alive, and she wanted to meet him. 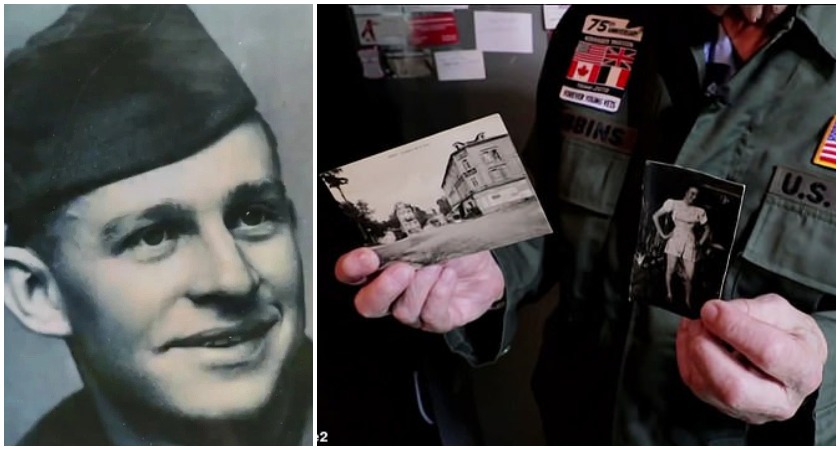 K.T. Robbins had kept a photo of Jeannine for the last 75 years (Image: France 2)

Camera crews followed an elated Mr Robbins to a French retirement home, where 92-year-old Jeannine Ganaye – now Jeannine Pierson – was waiting for him.

There were emotional scenes as the two, both now widowed, hugged and kissed in their first meeting for more than three quarters of a century.

Upon embracing Jeannine, Mr Robbins said: "I always loved you. You never got out of my heart".

Speaking to one of the journalists in French, Ms Pierson replied: "He said he loves me. I understood that much".

Mr Robbins then pulled out the photo of the Frenchwoman he had kept for so many decades.

"Wow," she exclaimed, with no translation necessary.

Mr Robbins was a 24-year-old US Army serviceman when he first laid eyes on Jeannine, then 18, in the village of Briey in 1944.

They met when the soldier was looking for someone to wash his clothes, and the teenager's mother offered to help.

The pair quickly fell in love but, two months later, Mr Robbins was told he had to quickly leave the village for the Eastern Front to fight the collapsing Nazi regime.

"I told her maybe I'll come back and take you, but it did not happen like that," he recalled.

Remembering that day, Ms Pierson added: "When he left in the truck I cried, of course, I was very sad. I wish, after the war, he hadn't returned to America."

When the war came to an end in 1945, Jeannine began learning basic English phrases in the hope that her Robbins would return. 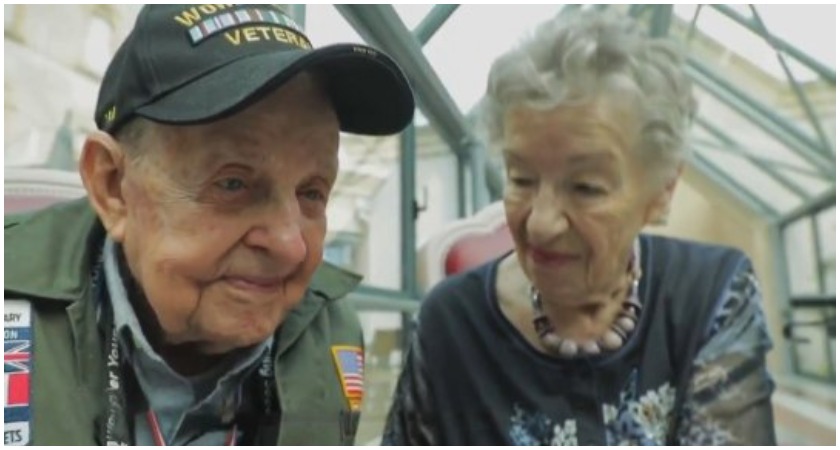 The pair, both widowed, vowed to meet again in future (Image: France 2)

Instead, Mr Robbins – who enlisted in the 26th Infantry, First Division in 1940 and later volunteered to serve in a bakery battalion – returned to the US where he met his wife of 70 years Lillian, who passed away in 2015 aged 92.

Jeannine also fell in love again, marrying in 1949 and becoming a mother to five children before the death of her husband.

But neither the Mr Robbins or Ms Pierson ever forgot about one another.

"I've always thought of him, thinking maybe he'll come," Ms Pierson told the reporters. "I wish he had come back".

Explaining why he hadn't, Mr Robbins said: "You know, when you get married, after that you can't do it anymore."

The former lovers spent a few hours together before Mr Robbins had to leave for the D-Day commemorations in Normandy.

"Jeannine, I love you girl," he said as they parted, once more, for the first time in 75 years – both vowing to meet again.