IMPRISONED Irishman Ibrahim Halawa has written an emotional 'Dear Ireland' letter from his Egyptian prison cell and says he longs to scream freedom from the Cliffs of Moher.

Mr Halawa, 20, has been in the prison since the summer of 2013, when he visited family in Egypt with his sisters Somaia, Fatima and Omaima.

The siblings took refuge in a Mosque in Cairo when Ibrahim, then aged 17 having been born in the Coombe hospital in Dublin in 1995, was arrested alongside his sisters.

While the women were released from prison in November 2013, Ibrahim Halawa remains imprisoned three years later.

He is being prosecuted alongside 494 co-defendants in mass trial for his alleged participation in the political protests in 2013. 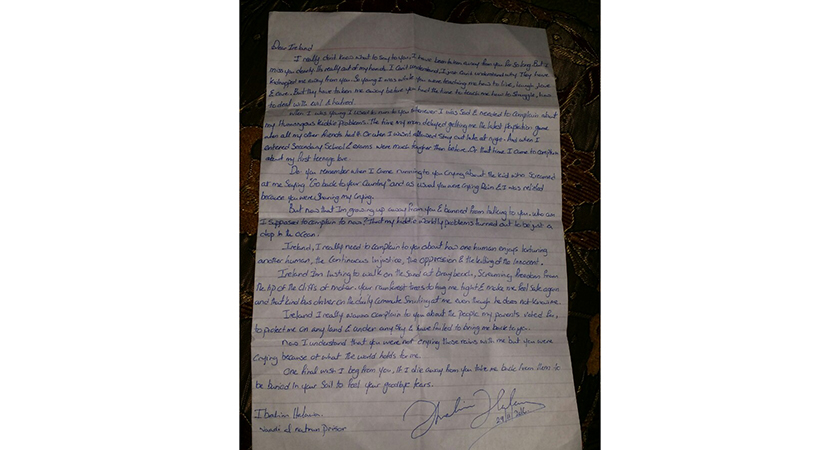 Ibrahim's latest letter titled Dear Ireland where he longs to "scream freedom" from the Cliffs of Moher. (Picture: Somaia Halawa)

Last month, Minster for Foreign Affairs Charlie Flanagan expressed his concern and frustration that Mr Halawa's trial had been delayed for the 16th time.

"My thoughts today are with Ibrahim Halawa and his family as he endures the disappointment of yet another adjournment in his court case in Egypt," he said. “Our priority remains to see this young man returned to Ireland and to his family as soon as possible.

"We will be pursuing further contacts at the highest levels with Egypt to address Mr. Halawa’s continued detention and to again call for his immediate return to Ireland."

Earlier today, Ibrahim Halawa's sister Somaia shared his letter titled Dear Ireland, where the young man wrote about his country, how he longs to walk Bray Head, scream freedom from the Cliffs of Moher and, if he should die in Egypt, to take him back to Ireland "to be buried in your soil to feel your goodbye tears."

I really don't know what to say to you, I have been away from you for so long, but I miss you dearly. It's really out of my hands. I can't understand, I just can't understand why they have kidnapped me away from you. So young I was, while you wee teaching me how to live, laugh love an care. But they have taken me away before you had the time to teach me how to struggle, how to deal with evil and hatred.

When I was young I used to run to you whenever I was sad and need to complain about my humongous kiddie problems. The time my mam delayed getting me the latest playstation game when all my other friends had it. Or when I wasn't allowed stay out late at night. And when I entered secondary school, and exams were much tougher than before. Or that time I came to complain about my teenage love.

Do you remember when I came running to you, crying about the kid who screamed at me saying, "Go back to your own country," and as usual you were crying rain and I was relieved because you were sharing my crying. But now that I'm growing up away from you and banned from talking to you, who am I supposed to complain to now? My kiddie worldly problems turned out to be just a drop in the ocean.

Ireland, I really need to complain to ups about how one human enjoys torturing another human, the continuous injustice, the oppression and the killing of the innocent.

Ireland I'm lusting to walk on the sand at Bray Head, screaming freedom from the tip of the Cliffs of Moher, your rainforest trees to hug me tight and me feel safe again and that kind bus driver on the daily commute, smiling at me even though he does not know me.

Ireland, I really wanna complain to you about the people my parents voted for, to protect me on any land and under any sky, and have failed to bring me back to you.

Now I understand that you were not crying those rains with me but you were curing because of what the world holds for me.,

One final wish I beg from you, if I die away from you, take me back from them to be buried in your soil to feel your goodbye tears.