DOVE and the The Body Shop have joined a number of high-profile animal protection groups in urging the EU to save cruelty free cosmetics.

Europe's longstanding ban on animal testing for cosmetics has recently come under threat, and the group is looking to mobilise millions of citizens around the continent to help protect it.

Leading animal protection groups Cruelty Free Europe, People for the Ethical Treatment of Animals (PETA), Humane Society International (HSI), Eurogroup for Animals and the European Coalition to End Animal Experiments (ECEAE) are working with Dove and The Body Shop and many other cruelty free brands.

In 2004, after decades of campaigning by consumers, animal protection organisations and several companies, the European Union banned the testing of cosmetics products on animals. In 2009, it prohibited tests for cosmetics ingredients and, finally, in 2013 it prohibited the sale of cosmetics that had been tested on animals. The EU’s approach became the blueprint for regulatory change in countries around the world.

Yet, recent test requirements from the European Chemicals Agency (ECHA) effectively destroy the bans and threaten the additional progress the European Parliament has been boldly calling for since 2018 – a global ban on all animal testing for cosmetics by 2023.

The Body Shop has been campaigning relentlessly against the practice of animal testing for cosmetics since 1989 - helping to lead the charge towards the current ban in Europe - while Dove has spent 15 years working to change the beauty industry for the better, starting with ‘Campaign for Real Beauty’ and launching the world’s biggest self-esteem programme.

As a proudly certified cruelty-free brand, Dove has supported global bans to permanently end animal testing everywhere in the world, working alongside lawmakers, animal protection organisations and like-minded companies to achieve this goal.

The two beauty brands have come together to galvanise consumers to take action to save Europe’s ban on animal testing by signing a European Citizens Initiative – a mechanism for EU Citizens to help shape the EU by calling on the European Commission to propose new laws.

ECHA is proposing new animal testing on ingredients that are known to be safe.

ECHA is calling for new animal testing on ingredients that have been safely used by consumers and handled safely in factories for many years – even those solely used for cosmetics. If this goes ahead, millions more animals could be subjected to cruel tests when there are other ways to generate safety data.

The time to act is now.

Animal testing is no longer necessary to ensure safety thanks to modern, human-relevant, non-animal scientific alternatives, which safety scientists have been developing and using for decades.

Speaking with a united voice to end animal testing for beauty products, The Body Shop, Dove and animal protection organisations are calling on consumers to sign a European Citizen’s Initiative, demanding that the European Commission:

Initiate legislative change to achieve consumer, worker and environmental protection for all cosmetics ingredients without new tests with animals for any purpose at any time.

Ensure human health and the environment are protected by managing chemicals without the addition of new animal testing requirements.

Commit, before the end of its current term of office, to a legislative proposal plotting a road map to phase out all animal testing in the EU.

Together, they aim to get to 1 million signatures in the fastest time ever for a European Citizens Initiative - sending a clear message that ECHA’s demands for new testing break with the policy of animal testing as a last resort, backed by the European Commission, and break the wishes of EU citizens.

But they can’t do it alone.

European citizens can sign the Initiative here and tell the Commission they won't accept broken promises from Europe, or regulations that mean animals suffer and die for cosmetics. 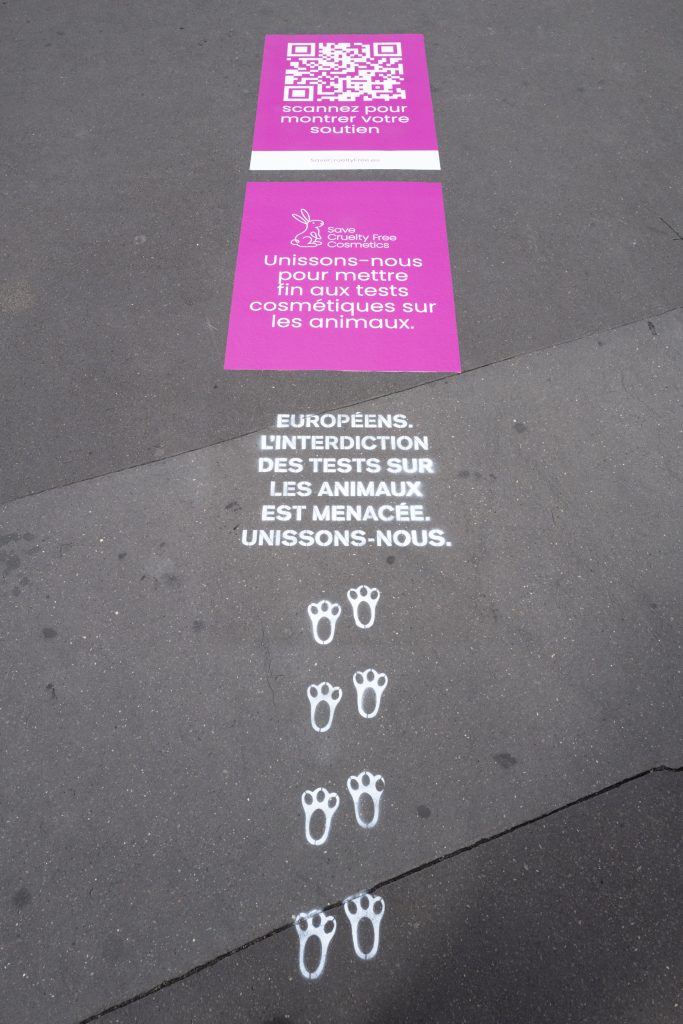 In a joint-statement, the collection of animals protection groups said: "Polls show that three quarters of adults in EU member states agree that animal testing for cosmetic products and their ingredients is unacceptable in all circumstances, and 70% back a phase-out plan for all animal testing. It’s sad that once again we have to fight a battle that Europe’s citizens thought they had already won, but with a successful ECI, we can make decision-makers listen, protect the ground-breaking bans and secure concerted action to end the suffering of animals in EU laboratories for good."

Dove's Senior Director of Global Communications and Sustainability Firdaous El Honsali said: "At Dove, we stand passionately against animal cruelty. We strongly believe that there is no role for animal testing for beauty products or their ingredients and have pioneered safe and humane alternatives to assess the safety of products and ingredients for many years.This commitment drives us to take urgent action to protect the ban against animal testing in the EU. Together with our partners, The Body Shop and leading animal protection groups, we urge both our peers in the beauty industry and the general public to lend their voice in the fight to end animal testing in the EU once and for all by signing this European Citizens Initiative."

The Body Shop International Global CSR and Activism Director Christopher Davis added: "The Body Shop was the first global beauty brand to fight against animal testing in cosmetics and this commitment has been at the forefront of our activist campaigns for over three decades. Our work with our campaign partners Cruelty Free International led to the original European Union ban in 2013.

"Today, we are calling the EU – home to the world’s largest cosmetics market – to stick to the trailblazing promise they made. We are proud to collaborate with Dove and speak as one voice, along with all those working towards a global end to animal testing for cosmetics, in support of this European Citizen’s Initiative".