A WOMAN from Cork lost her husband, toddler son and unborn child when a suicidal man deliberately drove at speed into  their car in Devon, an inquest has heard.

Elber Twomey, from Meelin, Co. Cork, was the only survivor of the collision that saw her lose her husband Con and son Óisín on the last day of a family holiday on July 6 of last year.

An inquest into the death of her 16-month-old son Óisín and 26-year-old Polish man, Marek Wojciechowski - the driver of the other vehicle - heard that on the morning of the crash, Mr Wojciechowski had left a four-page suicide note for his wife, who had asked him for a separation.

The Polish father-of-two was arrested at the scene but later died in hospital.

Mrs Twomey, who was pregnant at the time and was  left with serious head injuries following the crash, later lost her unborn child.

Her son Óisín was killed instantly from head and neck injuries and her husband, Con Twomey, who was 39, suffered serious brain injuries and died 10 months later.

The inquest in Devon involves the death of Marek Wojciechowski and Óisín Twomey only.

As Con Twomey died in hospital in Ireland, an inquest into his death will be held there.

Mrs Twomey attended the hearing with her brother and a family friend.

She later left the courtroom at times when details about the emergency efforts to save her son were recounted.

On the morning of July 6, 2012, Marek Wojciechowski, who was not dealing well with his marital and financial problems, left a four-page suicide note for his wife, who had asked him for a separation.

The couple had been working together at the Toorak Hotel in Torquay, Mr Wojciechowski as a kitchen porter and chef and his wife a house keeper. Shortly before his death, Mr Wojciechowski had taken up a new job working six nights a week for a local taxi company.

Upon reading the suicide note Mrs Wojciechowski became hysterical, contacted a friend and then notified the police.

Mr Wojciechowski  was listed as a high risk missing person and a description of his car was circulated to police.

PC Ben Bickford was driving up Hamelin Way in Torquay when he spotted the taxi. The police officer drove at speed to catch up with him and followed him flashing his lights in efforts to make Mr Wojciechowski pull over. 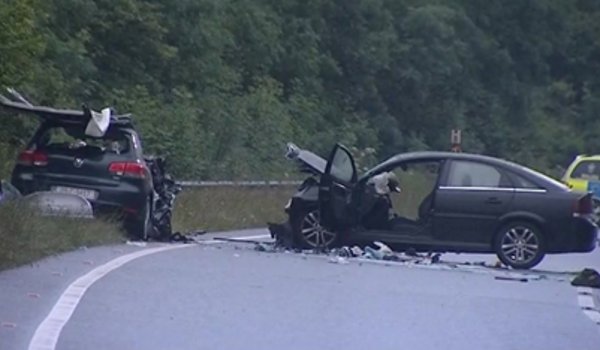 PC Bickford turned on his lights and siren, but instead of stopping, eyewitnesses at the hearing described how Mr Wojciechowski sped across into the opposite carriageway, driving head on towards the Twomey’s car. One witness said it was ‘impossible’ for the Irish family to get out of the way.

Eyewitness John Onions spoke of suffering flashbacks since the crash.

Moments earlier he let the Twomey’s Volkswagen Golf overtake him at a junction. Mr Onions spoke of the taxi driving “straight across into the car in front of me”. “It sounds awful now,” he said. “But the crash looked deliberate.

Footage captured on CCTV showed that Mr Wojciechowski  had driven 12 times around the Hamelin Way loop before he was spotted by police.

Elber Twomey asked questions through her barrister Chris Hough about the lack of a specific police procedure to deal with ‘suicidal drivers’.

PC Bickford stated that when he realised Mr Wojciechowski  was not going to stop he pulled back as he is not  a trained pursuit driver. "He made a deliberate act of accelerating and driving straight into the other carriageway… I was just in shock," the police officer explained.

Barrister Chris Hough also asked if PC Bickford felt his actions in pursuit of Mr Wojciechowski had exacerbated the situation.

Chief Superintendent Jim Nye also spoke at the hearing saying: "No one foresaw that outcome. It is tragic and it affected the whole policing community, but it was in line with guidelines.

"I don't think this has ever happened before in the Devon and Cornwall force. You cannot judge on the outcome, but on the decision-making process. The outcome is horribly tragic, but what happened is very, very rare."

Barrister Chris Hough said that Mrs Twomey is “very concerned that no family ever has to go through what she has been through again and she is concerned that there is nothing in your report that indicates that any lessons can be learnt.”

The was also some legal wrangling between the police barrister and Chris Hough regarding whether Mrs Twomey will be allowed to make a statement about how she has been affected by the tragedy.

The inquest was due to conclude last week, but the coroner’s office of Torbay and South Devon District said there was a delay due a “technical problem”  regarding the jury, who were given a day off  last Thursday.

The inquest will instead be resumed on Monday.

Motorcyclist killed in two-vehicle collision in Co Down