IRELAND'S HOMELESS crisis is widely regarded as a massive failure by the Irish government to protect some of the country's most vulnerable people.

Rising rents and a lack of affordable housing have contributed to the rising numbers of homelessness in Ireland, with an estimated 10,000 people living without a home. One third of these are believed to be children.

While the government has been criticised time and again by campaigners for their lack of action, some people in Ireland are reaching out in any way they can to lessen the suffering of those living on the streets.

One such group of people is staff in a shoe shop in Dublin City centre.

Tara Leathers in Dame Street have announced plans to assist people without a home who are now facing a cold winter on the streets.

They have appealed for anyone who finds themselves in this situation to call into the shop, where they will repair sleeping bags free of charge.

The shoe shop made the appeal on Facebook, saying:

"If you find yourself in a situation where you are sleeping rough please contact us at Tara Leathers 67 Dame Street as we are repairing sleeping bags for free.
As the saying goes "I always wondered why somebody didn't do something then I realised I am somebody".
Please spread the word about this campaign and lets try our best to end the homeless situation in our cities." 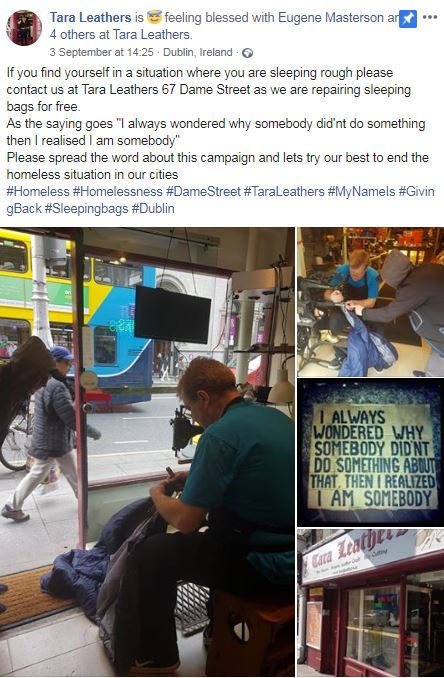 The business ended their post with a series of hashtags used to highlight the homeless crisis, including #MyNameIs, a campaign created to remind people that homeless children are real people with real lives rather than just a statistic.