THE LARGEST known piece of a Tricolour flag flown during the Easter Rising in Dublin is now back to Ireland after a century.

The flag, which was flown above Jacob’s Biscuit Factory after the flag above the General Post Office building was destroyed, has been presented to Glasnevin Museum by the ancestor of a British soldier.

David Blake’s Great Grandfather John le Provost fought as a member of the Jacob’s Garrison, who claimed the flag after the rebels’ defeat.

Le Provost climbed onto the roof of Jacob’s Biscuit Factory and tore down the Tricolour under Irish sniper fire.

It is unknown how exactly the banner was divided, but the fragment donated contains green, white and gold.

Mr Blake only learned of the flag’s significance recently after reading about it in his local newspaper.

His great grandfather sent three fragments of the flag to his wife Mary La Singe in Jersey in 1916, where it has remained for 100 years.

Speaking at the presentation ceremony in Glasnevin Mr Blake said: "It is only correct and necessary that the Jacob’s Tricolour comes back home.

The Tricolour was a replacement flag made by Thomas Meldon, George Ward and Derry Connell after the GPO flag was destroyed by British soldiers. 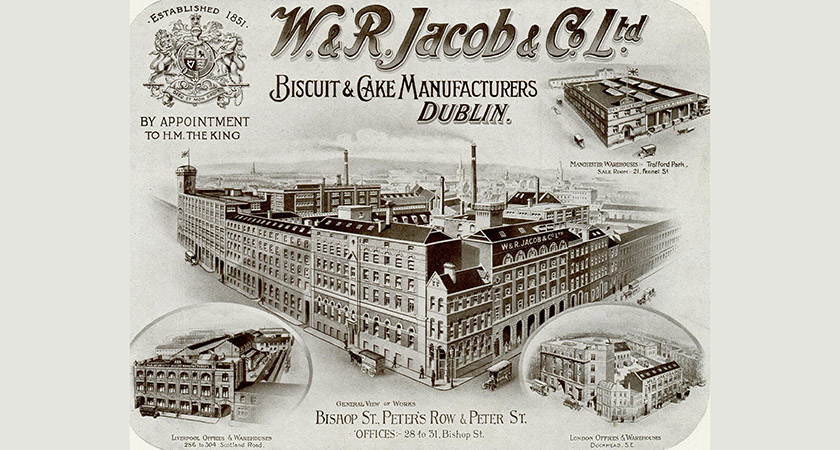 The flag was hoisted above Jacob's Biscuit Factory during the height of the rebellion [Picture: History Ireland]
It was then nailed to a flagpole and flown above Jacob’s Factory until it was taken down on April 30, the date of the rebels’ official surrender.

Both Meldon and Ward are buried in Glasnevin Cemetery, where the presentation ceremony was held yesterday.

Also speaking at the ceremony, Chairman of Glasnevin Trust, John Green, expressed his gratitude towards Mr Blake and his family: "This is a special day for Glasnevin Cemetery Museum; the presentation of the largest known remnant of the Jacob's factory Tricolour.

"It is not only the symbolism of the flag returning to Dublin, to the final resting place of its makers but also the stories it enables us to tell.

"The story of the Jersey contingent and the Royal Irish Rifles; the story of how the flag went to Jersey.

"The extraordinary letter of provenance from John Le Provost which complements the witness statement of Thomas Meldon so well.

"Glasnevin has several other links with the Jacob's factory and the Flags of 1916. Through the exhibition of this flag we will be able encourage museum visitors to delve deeper into this complex period in our history.

"Thank you to David Blake and his family for presenting it to us but most importantly for preserving it over the years."