AN RTE exit poll has indicated that there would be strong support for a united Ireland among Irish voters.

According to the exit poll, 65% of voters said they would be in favour of a united Ireland if a referendum was held tomorrow, while 19% said they wouldn’t be.

Once you factor out those who either said they did not know or refused to vote, the number of voters in favour of the proposal rises to 77%, and the number of those against rises to 23%. 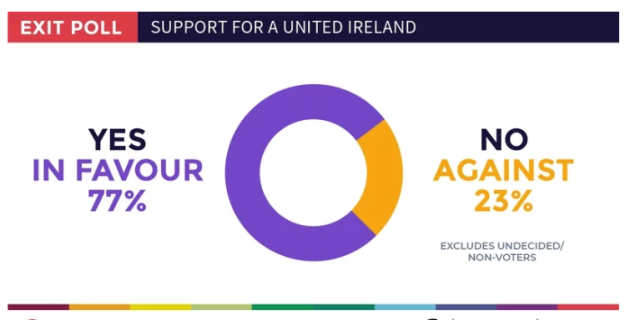 ‘United Ireland’ is the proposition that all of Ireland should be a single sovereign state.

Such a move would see Northern Ireland leave the United Kingdom and join a union with its southern neighbour.

Such a proposal has become more likely since Britain announced its decision to leave the European Union, following a referendum in 2016, in order to avoid the requirement for a hard border between Northern Ireland and the Republic of Ireland.

Sinn Fein called for a referendum on the subject of a united Ireland shortly after the result of the Brexit referendum.

Meanwhile, the exit poll also indicates that the Green Party’s candidate will top the European election poll in Dublin, and that the party is in strong contention for seats in the two other constituencies.

The exit poll has Ciaran Cuffe on 23%, with Fine Gael’s Frances Fitzgerald on 14%. Fianna Fail’s Barry Andrews and Independent TD Clare Daly are both on 12% while Sinn Fein’s Lynn Boylan is on 10%.

The poll also found that 90% of voters feel that the government needs to heavily prioritise climate change. This comes in the wake of Ireland becoming just the second nation in the world to declare a ‘climate emergency’ earlier this month.