THE families of the survivors of last month’s Berkeley balcony collapse have issued a statement, thanking the “immensely supportive” public.

Clodagh Cogley, Aoife Beary, Hannah Waters and Niall Murray all remain in the US, where they are receiving treatment for their injuries at the Santa Clara Valley Medical Centre in California.

On June 16, the balcony of an apartment in Berkeley collapsed, claiming the lives of six Irish students. The tragedy also left seven other students with grievous injuries.

The students had been celebrating the 21st birthday of Aoife Beary at the time.

“As traumatic and difficult as the past five weeks have been for Aoife, Clodagh, Hannah and Niall, our constant thoughts and prayers are with the bereaved families and friends,” the families said in their statement, released at the weekend.

The statement goes on to thank everyone who has offered the families help and support since the accident happened.

In the weeks since the incident, an online fundraiser has seen $279,000 (£180,000) raised to help the families of those effected by the tragedy.

The money will go towards many costs, including medical bills and modifying the homes of those whose lives have been permanently changed by the incident.

The families went on to say they hope the students will be making their way home from Berkeley in the coming weeks. 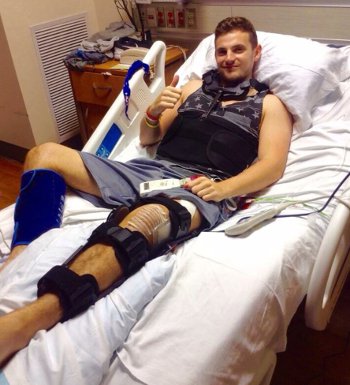 “We hope that our children will be able to make their way home in the coming weeks and months when they are individually ready and sufficiently strong enough to do so,” they said.

“We would only ask that, when they eventually do return, that their many friends and well-wishers will be able to contain themselves a little longer until they are really ready, physically and emotionally, to reach out and invite them to meet.

“In the circumstances, we hope you will understand and accept our need as parents and siblings to be overprotective of our brothers, sisters and our kids for some time to come.”

They added: “They have been through so much.”

While Clodagh, Aoife, Hannah and Niall remain in hospital in the US, the three other injured victims have continued their recovery outside of the medical centres in California.

Sean Fahey flew home a week after the balcony collapse, while Conor Flynn was released from hospital soon after.