Pat Hickey has broken his silence for the first time in a statement. (Credit ©INPHO/Dan Sheridan)

FORMER Olympic Council of Ireland president Pat Hickey has broken his silence about his arrest in the Rio ticketing scandal.

Mr Hickey, who was arrested at a hotel in Rio de Janeiro on August 17, released a statement yesterday through Dublin-based public relations agency Paul Allen and Associates.

In the statement he refers to his house arrest, the charges against him, his faith in the Brazilian judicial system, how he intends to "defend [his] good name" and the outpouring of support he has received from "thousands of people in Ireland".

"I have just received formal notification from the Brazilian authorities of the charges laid against me [...] I intend to face all the charges and to fight each and every one of them," he said.

"I am completely innocent of all such charges and I will also vigorously defend my good name and character that I have spent my lifetime building through voluntary service for numerous sporting bodies," he added, before explaining "this has been a life changing experience for me, my wife, my four children and my five grandchildren and my priority is to recover my health and see my family as soon as possible."

Regarding his current situation, he said: "For clarity, I am not under house arrest as, like with so many things with this case, has been misreported by the media."

Following his arrest, Mr Hickey was held at Rio's Bangu 10 prison until August 29, when he was conditionally released.

In a statement from the Court at the time, Judge Almeida said that the precautionary imprisonment of Mr Hickey was not necessary as, if found guilty, the required imprisonment would not exceed four years.

The Judge also said that Mr Hickey's release would not pose "any obstacle or risk to public order, criminal investigation or future application of criminal law".

Mr Hickey was required to remain in Rio following his release from prison.

An OCI spokeswoman confirmed to The Irish Post at the time that an apartment had been rented for one month for Mr Hickey at a €2,300 cost to the OCI.

Judge de Melo also ordered that Mr Hickey's passport must remain in the possession of the police and that he must present himself to the Juvenile Court in Rio on the 20th of each month.

Mr Hickey must also adhere to a curfew of 10pm.

There are nine others charged in connection with the ticketing scandal in Rio, including Irishman and THG official Kevin Mallon, who is also in Rio.

The other eight accused are THG officials Marcus Evans, Maarten Van Os, Martin Studd and David Patrick Gilmore, three directors of Pro10, another ticketing company, named as Michael Glynn, Ken Murray and Eamon Collins and translator Barbara Carnieri, who is a Brazilian national and was a translator for Kevin Mallon.

Apart from Mr Hickey and Mr Mallon, none of the other accused are currently in Brazil.

The statement from the Brazilian Judicial Courts also stipulates that Mr Mallon and Mr Hickey are forbidden from attending the Paralympic Games.

Mr Hickey has been involved in various senior roles of many Olympic councils since the early 1980s.

He was initially elected as vice-president of the Olympic Council of Ireland in 1984 and later elected president in 1989.

In 1995 he became a member of the International Olympic Committee before being elected to its executive board in 2012.

In the same year, he was also elected senior vice-president of World Olympic Committees.

Yesterday Mr Hickey admitted that he does "believe in the Brazilian judicial system" and is "confident that [he] will be discharged of all accusations".

His wife Sylviana Hickey, a French national, is currently in Ireland with Mr Hickey's children and grandchildren.

On the morning of Mr Hickey's arrest, Mrs Hickey told police that her husband had left the country, although he was found in a hotel room a short time later.

After his arrest, Mr Hickey suffered some pains in his chest and, due to an existing heart condition, was taken to Samaritano Hospital for a medical evaluation.

Mr Hickey concluded yesterday's statement by saying he was "very heartened and humbled by the outpouring of support from the thousands of people in Ireland and the international sporting world".

He also stated that he will not be making any further comment until the case has been concluded.

Read the statement in full below... 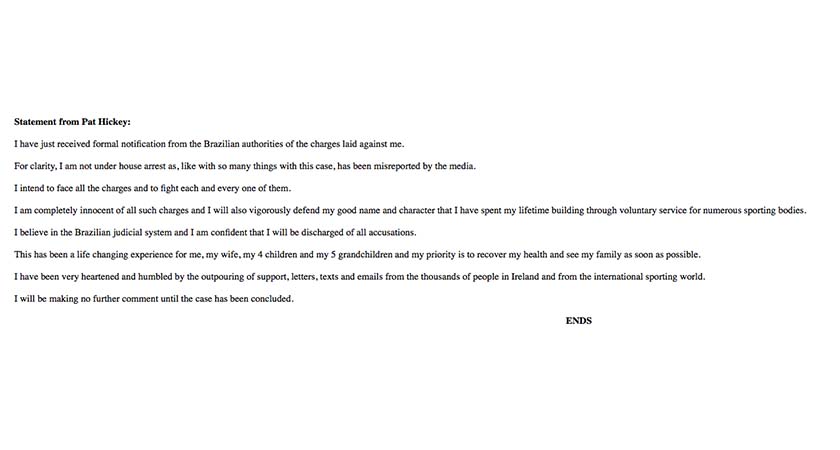