Eoghan Gorman was left paralysed from the shoulders down after the accident in 2021 (Image: fightwitheoghan.ie)

A FUNDRAISER set up for a young Irishman left paralysed after a mountain biking accident has surpassed €30,000 in just one day.

Eoghan Gorman, 23, from Clondalkin in Dublin fractured his spine after coming off his bike while coming down a trail in the Dublin Mountains in October 2021.

The accident happened just months after the keen sportsman and traveller had set up home with his girlfriend Saoirse in Newcastle, Co. Dublin.

Eoghan is now breathing unassisted after being told he may never come off a ventilator (Image: fightwitheoghan.ie)

He had also recently completed an apprenticeship as a cabinet-maker with Kilmmek Furniture and had bought his dream car.

Despite being told he may never breathe unassisted again, Eoghan — who enjoyed hurling, basketball and martial arts — has made remarkable progress.

However, he remains paralysed from the neck down and the cost of his long-term care is expected to cost hundreds of thousands of euros, prompting his supporters to set up the fundraiser, which went live on Saturday evening.

"If you've ever met Eoghan I'm sure you know how great a person he is, and this is truly a sad time," read a statement on his GoFundMe page.

“Eoghan has put up an amazing fight and we now need to help him continue this fight.”

Following the accident on October 3, the former pupil at Holy Family Community school in Rathcoole was put in an induced coma and placed on a life-support machine before undergoing spinal surgery.

He was also unable to breathe for himself and was told he may need to be on a ventilator permanently. 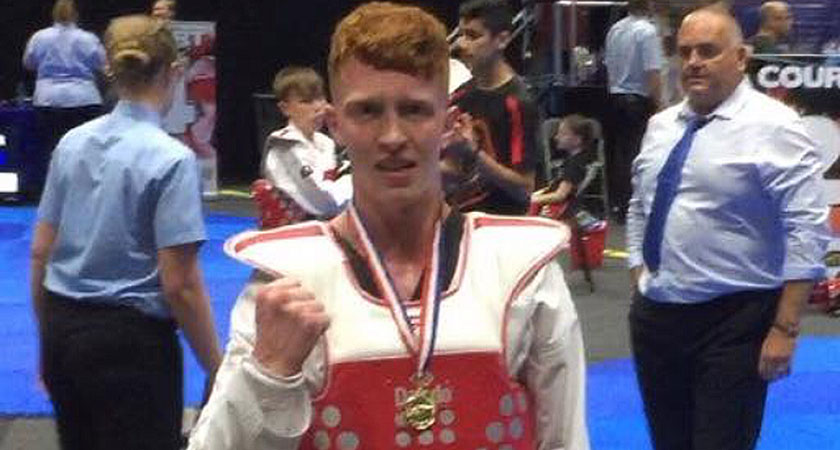 Eoghan was a keen sportsman and excelled in martial arts (Image: fightwitheoghan.ie)

However, Eoghan — who represented Ireland at the World Kickboxing Championships in 2016 — is now breathing unassisted and in the coming months is expected to leave the National Rehabilitation Hospital in Dun Laoghaire.

The fundraiser set up by his family and supporters aimed to raise €50,000, however it has been flooded with donations in the last two days, already topping €30,000.

Unfortunately, due to the nature of his injuries and the long-term care required, the cost will run into the hundreds of thousands, meaning Eoghan and his family need all the support they can get.

“When he does [come home] he will need around-the-clock care, specialised equipment and his home will have to be significantly modified to cater for his many medical needs, costing hundreds of thousands of euros,” read a statement on the Fight With Eoghan website.

“Although this is a difficult, sad time, Eoghan keeps fighting and we now need to help him to continue the fight.”

You can donate to Eoghan’s fundraiser by visiting the GoFundMe page here.