IRELAND MAY be home to some of the funniest comedians and writers in the world, but it's not home to the funniest joke of 2019.

That particular honour instead goes to Swedish comedian Olaf Falafel who took home Dave’s Funniest Joke of the Fringe award for the vegetable-themed Tourette's one-liner: “I keep randomly shouting out 'Broccoli' and 'Cauliflower' - I think I might have Florets”.

It was crowned the funniest of the Fringe with 41% of Brits voting it the top tickler, after it was nominated from his show Knitting with Maracas at The Pear Tree.

With the goal of finding the wittiest one-liners, Dave recruited the help of an expert panel of ten judges, comprising the UK’s leading comedy critics. After touring and scouring hundreds of venues and shows at the renowned Edinburgh Festival Fringe Festival, the panel submitted their favourite six jokes, listed without naming the comics behind each one, to a vote of 2,000 Brits to reveal the funniest.

1.       I keep randomly shouting out 'Broccoli' and 'Cauliflower' - I think I might have Florets - Olaf Falafel

2.       Someone stole my antidepressants. Whoever they are, I hope they’re happy.” - Richard Stott

3.       What’s driving Brexit? From here it looks like it’s probably the Duke of Edinburgh. - Milton Jones

7.       I accidentally booked myself onto an escapology course; I'm really struggling to get out of it. - Adele Cliff

8.       After learning 6 hours of basic semaphore, I was flagging. - Richard Pulsford

10.    I’ve got an Eton-themed Advent calendar, where all the doors are opened for me by my dad’s contacts - Ivo Graham 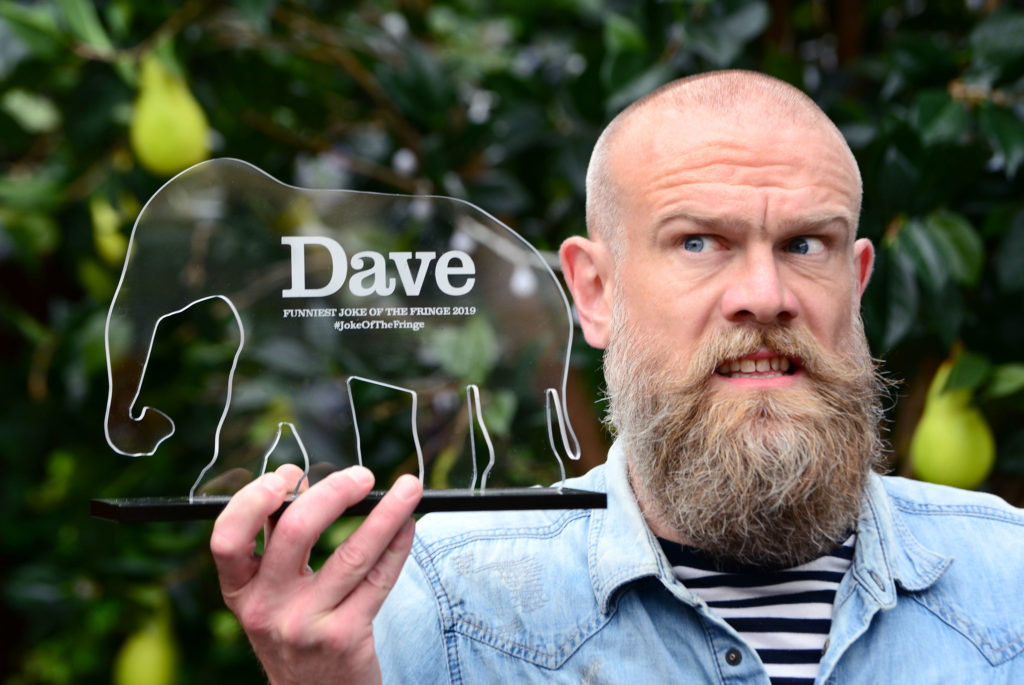 Winner Olaf Falafel is a surrealist comedian and illustrator. Falafel claims that he is Sweden’s 8th funniest comedian. He also works as a children’s book author. He has performed two shows this year at Edinburgh, the first was It’s One Giant Leek for Mankind. His current show Knitting with Maracas is at 2.50pm at The Pear Tree.

On his joke claiming the top spot, Olaf Falafel said: "This is a fantastic honour but it’s like I’ve always said, jokes about white sugar are rare, jokes about brown sugar... Demerara.“

Open to both recognized and emerging comedians, The Dave award celebrates the pool of talent Edinburgh Fringe Festival has to offer, celebrating the true skill that it takes to write a sidesplitting one-liner.To ensure that there is no bias towards well-known or favourite comedians during the public vote, the jokes are listed with no reference to the comedian that wrote and performed them – meaning it is purely judged on the humour of the jokes themselves.

Luke Hales, Dave channel director, said “What a year it’s been for current affairs and British eccentricities! The comedic opportunities to be creative are endless and above all we’ve all needed a good laugh in 2019. We have really enjoyed the great anecdotes and one liners submitted this year and we couldn’t be happier to crown Olaf Falafel as the winner of this year’s Dave’s Funniest Joke of the Fringe Award!”

The Edinburgh Fringe Festival is widely acknowledged to be the biggest arts festival in the world and takes place every August for three weeks in Scotland’s capital city.