SINN Féin president Gerry Adams has come out in defence of his use of a racist term on Twitter on Sunday.

In a now-removed tweet, Mr Adams caused controversy by using the word ‘n****r’ and comparing the plight of African-American slaves in the US to that of Irish nationalists.

He made the comments while watching the 2012 film Django Unchained, which centres around African-American slaves in the mid-1800s.

He drew a comparison between the film’s main character, Django, and nationalists in Ballymurphy, an area of Belfast where 10 nationalists were killed by British paratroopers in August 1971.

But he has come out in defence of his actions, saying he is opposed to racism and he did not intend to “cause any offence whatsoever”. 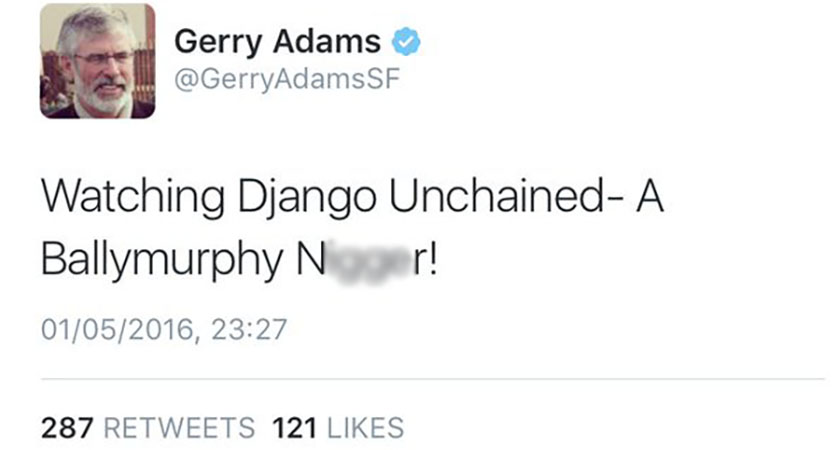 “The fact is that nationalists in the north, including those from Ballymurphy, were treated in much the same way as African Americans until we stood up for ourselves,” Mr Adams said today.

“If anyone is genuinely offended by my use of the N-word they misunderstand or misrepresent the context in which it was used. For this reason I deleted the tweets.”

“Attempting to identify/align yourself w/ another marginalised group while using a historically oppressive word is... something,” wrote Amy O’Connor.

“Whatever about use of N-word by #gerryadams, his justification that nationalists were treated like slaves in the US is plain wrong,” Kieran Cuddihy said.

“Anyone who has seen the film, as I did last evening, and who is familiar with the plight of nationalists in the north until recently, would know that my tweets about the film and the use of the N-word were ironic and not intended to cause any offence whatsoever,” Mr Adams said.