A RARE first edition of the fantasy novel Harry Potter and the Philosopher's Stone is expected to fetch up to £30,000 (€34,000) at auction next week.

The slightly worn and faded copy of author JK Rowling's opening installment in the Harry Potter book series is one of just 500 first edition copies printed in 1997.

Lot 535 of Forum Auction's sale is described as an "ex-library copy" with "ink stamp", "bumped" corners and a "peeling" laminate - but overall as "a very good, bright copy, preserved in a fine example of a later dust-jacket".

Could I have one?

You're wondering if your old copy is worth a bomb now, aren't you?

Things to look out for include a print line that reads "10987654321" and the crediting of "Joanne Rowling" rather than JK Rowling on the title page.

First edition copies also include misprint on page 53, in which "1 wand" is included twice on a list of things Harry needs for Hogwarts.

Two years ago, another first edition of the same book sold for more than £60,000 at auction. 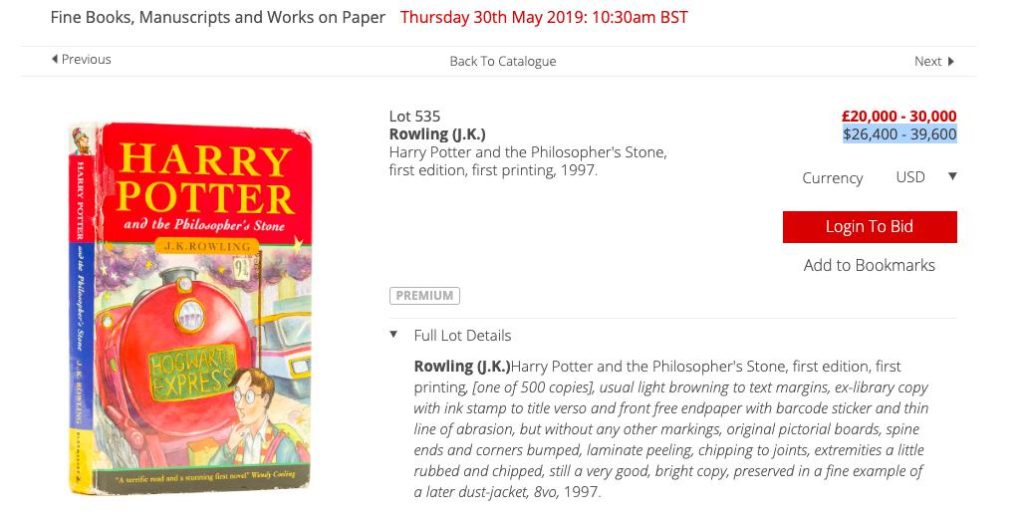 Even if your old copy isn't one, some other less rare editions of the book have been known to sell in the hundreds, even thousands depending on their condition.

Speaking to the Mirror, Matthew Haley, head of books at auctioneer Bonhams, said: "That first book in the series is worth hugely more than the subsequent volumes, and condition is everything.

"More recently first editions of the first book in fair condition have sold for around £4,000.

"Obviously genuine signatures or even better inscriptions by JK Rowling can add tremendously to the value."

Who knows, perhaps a little piece of magic is gathering dust in your loft...