TWO men were being questioned last night in connection with the deaths of three teenagers outside a St Patrick's Day disco at a hotel in Northern Ireland.

The pair, aged 52 and 40, were arrested on suspicion of manslaughter on Tuesday after Connor Currie, 16, Lauren Bullock, 17, and Morgan Barnard, 17, lost their lives in a crush outside the Greenvale Hotel in Cookstown, Co. Tyrone.

Hotel owner Michael McElhatton is understood to be one of the men being questioned over the suspected stampede, which occurred as hundreds of young people queued by the entrance of the venue to enter a disco inside on Sunday night.

In a statement yesterday evening, the PSNI said: "Detectives from PSNI Major Investigation Team investigating the deaths of three teenagers at the Greenvale Hotel in Cookstown on Saint Patrick’s Day have arrested two men aged 52 and 40 earlier today on suspicion of manslaughter. They are currently in custody."

Police are continuing to appeal to the approximately 400 young people who may have attended the deadly St Patrick’s night disco to come forward.

Detective Chief Superintenden Raymond Murray said: "I want to thank everyone who has spoken with us so far, however, there is still a significant number of people who were there that night, in the queue, and I need them to come forward to speak to police so we can understand what happened. 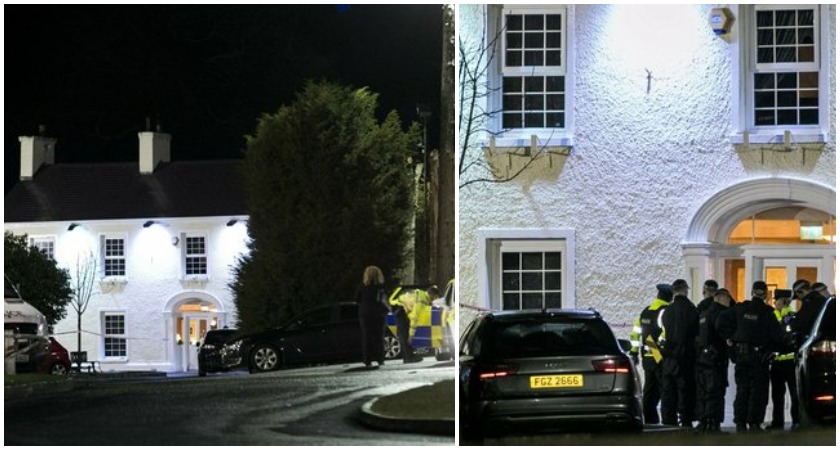 The scene outside the Greenvale Hotel in Cookstown shortly after the tragedy (Image: PA)

"Over a day into our investigation I can tell you we have already traced the identities of over 160 witnesses and have already spoken to a number of young people who were in the queue at the Greenvale Hotel on Sunday night,.

"Arrangements have been made to speak to many more over the coming days".

Appealing for more to come forward, DCS Murray said both police and the Public Prosecution Service (PPS) had agreed that any witnesses under the age of 18 would not be investigated for attempting to enter a licensed premises while underage.

"A number of parents have indicated they are concerned that their children, who may have been underage, were trying to enter a licensed premises," he continued.

"I want to reassure you, the sole focus of our investigation is not the age of people who were at the event – it is about trying to find answers for the families of the three teenagers who tragically died.

"We need to know what you saw so the heartbroken families of Connor, Lauren and Morgan know what happened to their children".

DCS Murray also revealed that the "crush" that resulted in the deaths lasted "for several minutes".

He added: "I would urge parents to talk with your children, support them and encourage them to come forward and tell their story to police so we can get an accurate picture of events that night.

"Talk to your children, reassure them – we know they may be scared – but again I can assure you we are only interested in establishing what happened.

"Their account of events on Sunday night could be crucial to establishing how Connor, Lauren and Morgan died."