The website included the Co. Wicklow-born singer/songwriter in a piece titled, ‘Brits Blitz: The surprise stars flying the flag in music’. 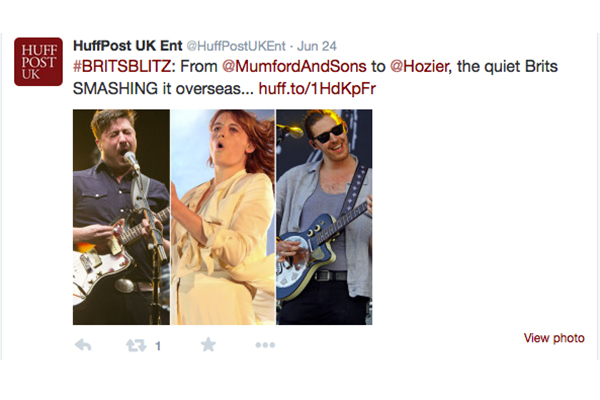 It’s no surprise others have tried to claim Hozier as their own, given his fast-growing fanbase.

His song Take Me to Church reached number 2 in Britain and Ireland and was the most streamed song on music streaming service Spotify last year with 87million listens.

He performed the hit with Annie Lennox at the 2015 Grammy Awards and again at this year's Billboard Music Awards.

Aggrieved Twitter users were quick to point out the mistake.

@HuffPostUKEnt Sorry but @Hozier is Irish, as you well know. Would you claim German, French, Canadian artists as yours too?! #BRITSBLITZ

Hozier?! Somebody get them a map. Saying that you know he's Irish and including him anyway is doubly offensive. https://t.co/qbkiDjxyfu

Hozier hasn't had much luck geography-wise, telling The Irish Post in an interview that while he is from Wicklow, the oft-repeated claim that he is from Bray is false.

Still, at least Bray is in Ireland. 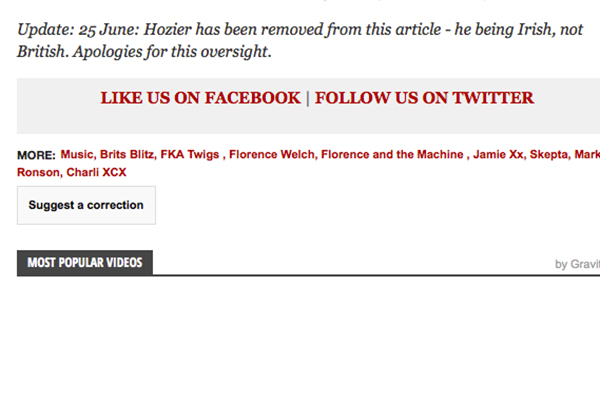 The Huffington Post's update to the article

At least Hozier is in esteemed company.

Bono and Bob Geldof — who have both received honorary knighthoods from the Queen — are often mistaken as British while British TV Kate Thornton received a bit of a dressing down from Samuel L Jackson for claiming Colin Farrell “as our own because he’s from Ireland”.