Ibrahim Halawa, the Irishman in an Egyptian prison, has written a 'Graduation Day' letter to his family.

IRISHMAN Ibrahim Halawa has written a Graduation Day letter to his family from his Egyptian prison cell.

Ibrahim Halawa visited family in Egypt in the summer of 2013 with his three older sisters, Somaia, Fatima and Omaima.

The siblings took refuge in a Mosque in Cairo when Ibrahim, who was born in the Coombe hospital in Dublin 1995, was arrested alongside his sisters.

While the women were released from prison in November 2013, Ibrahim Halawa remains imprisoned three years later.

He is being prosecuted alongside 494 co-defendants in mass trial for his alleged participation at during the political protests in 2013.

In August this year, a Presidential Decree Law 140 application was made to the Egyptian government and if granted, it would allow Ibrahim to return to his home country of Ireland.

However, there has been no response to the application yet. 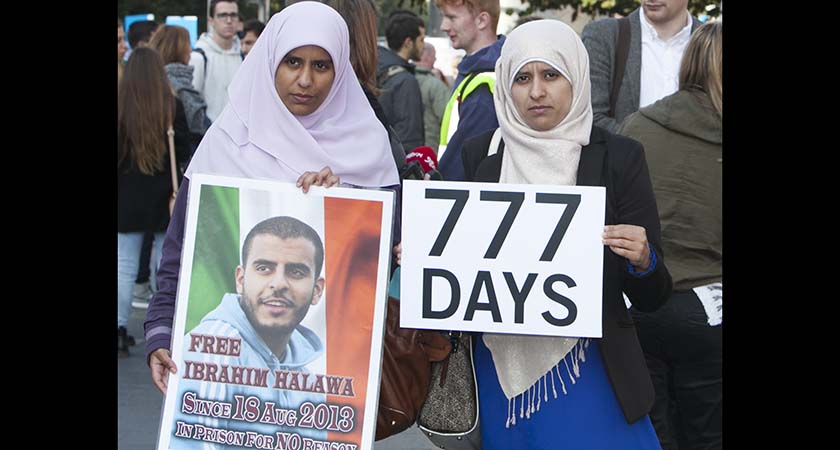 Somaia Halawa, Ibrahim's older sister told The Irish Post that the application to the Egyptian government is their "biggest hope" of getting Ibrahim home.

"After three years of campaigning for Ibrahim's freedom, this is our biggest hope to return Ibrahim home," Somaia said.

"There were 600 people released last week from a Presidential pardon [in Egypt]," she added, "Yet Ibrahim was not one of them."

This week, the Halawa family released an emotional letter they had received from Ibrahim.

Written from his prison cell, Ibrahim wrote about his would-be university graduation, and where he is now.

Read the excerpts from Ibrahim's letter below... 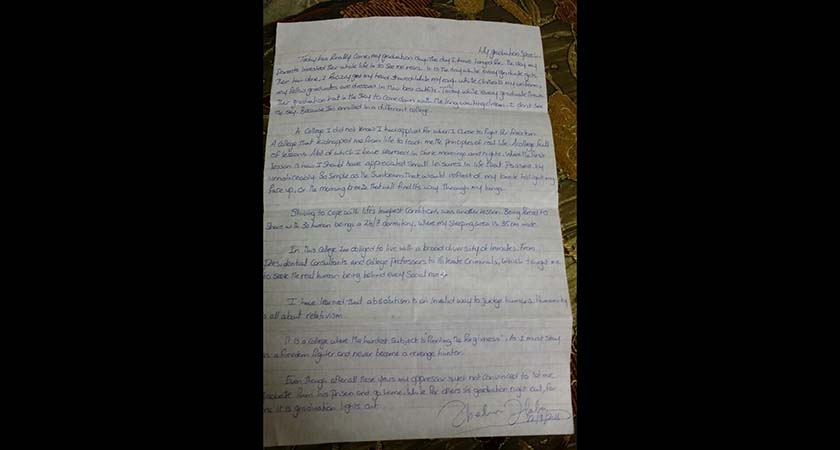 The letter the Halawa family received from Ibrahim Halawa.

"While every graduate gets their hair done, I forcibly get my head shaved."

"Today has finally come, my graduation day, the day I have longed for. The day my parents invested their whole lives in to see me reach. While every graduate gets their hair done, I forcibly get my head shaved, while my rough white clothes is my uniform, my fellow graduates are dressed in their best outfits." 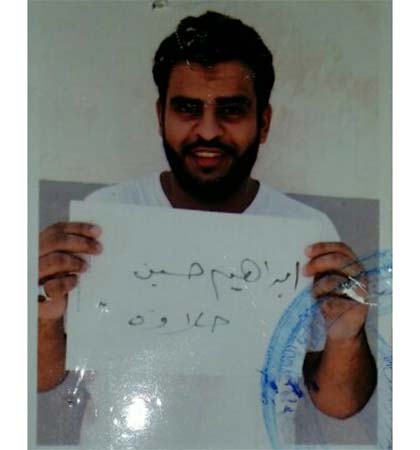 Ibrahim Halawa in a photograph taken whilst in prison. His sister Somaia says Ibrahim looks at this picture and wishes it could be his graduation picture. (Source: Somaia Halawa)

"Today while every graduate throws their graduation hat in the sky, I don’t see the sky because I’m enrolled in a different college."

"Today while every graduate throws their graduation hat in the sky to come down with the long waiting dream, I don’t see the sky because I’m enrolled in a different college; a college I did not know I had applied for when I chose to fight for freedom, a college that kidnapped me from life to teach me the principles of really life, a college full of lessons."

"I have learned that absolutism is an invalid way to judge humans, humanity is all about relativism."

"In this college I’m obliged to live with a broad diversity of inmates from presidential consultants and college professors to illiterate criminals which taught me to see the real human being behind every social rank. I have learned that absolutism is an invalid way to judge humans, humanity is all about relativism. It is a college where the hardest subject is finding the forgiveness, as I must say as a freedom fighter I never became a revenge hunter."

"Even though after all these years my oppressor is yet not convicted to let me graduate from his prison and go home, while for others it’s graduation night out for me its graduation lights out."