Ireland gets first glimpse of the post-pandemic social distancing pub

IRELAND HAD its first glimpse of the post-pandemic pub of the future yesterday evening, and the general consensus is that it is not good.

Publicans across the country have been preparing for their businesses to reopen, which will likely not happen until mid-August-- although some are hoping to open sooner thanks to a loophole in the Government's phased reopening plans.

When bars do eventually open their doors to the public once more, there will be huge changes in place: initial guidelines indicate that there will be no live music, sitting at the bar will be no more, strict 'table service' will be in place, people must remain six feet apart and there could be a booking system in place, similar to restaurants.

While on paper the pub of the future already sounds pretty bleak, last night multiple RTÉ presenters took the Irish public to see what it could look like, and somehow it's even worse.

Bright yellow signs with reminders to maintain a social distance dotted the pub, the bar was cordoned off and the presenters were seated at a safe distance from one another-- which made conversation difficult. 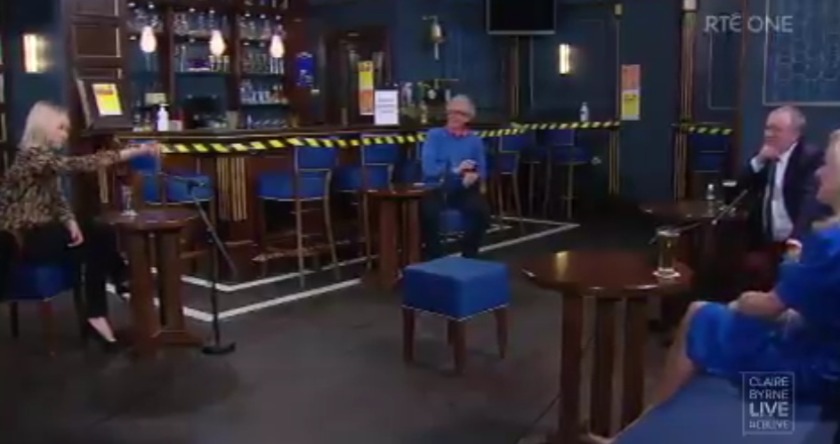 Joe Duffy said "we are in Aslan country, this is a crazy world," as he sat two metres apart from the other guests.

"Unless you’re coming to the pub with your crossword and your game of Boggle and all you want to do is sit in the corner on your own, people won’t come," he despaired.

Like everyone in Ireland, he knew pubs would not be the same at the other end of the pandemic, but admitted "This is worse than I thought it was going to be".

"You wouldn't want to be having a private conversation this far apart," Nuala Carey agreed, adding that "the craic is gone".

Claire takes a trip to McCoy's pub in Fair City to have a drink with @billykeane15, @joeliveline & @nualacarey25  but there's a catch! We've imposed possible pandemic restrictions there and it is very different to your normal pub experience. #CBLive pic.twitter.com/we1CVd5f4L

Publican Billy Keane shared Duffy's concerns that people who wanted to have a good night out would enter the pub, realise the social distancing measures made it difficult for private conversation and return to the house for a party instead, but Keane also remained positive, saying that while conversation would be difficult "you could have a sing-song. A sing-song always brings people together".

Others were not quite so optimistic, as despairing comments began pouring in on social media at the future of the Irish pub.

The Irish pub of the future on #cblive . Is Jeremy Beadle going to jump out from the jax. The barman just took off his mask after saying he can’t breath. 2 meter signs on the seats. You can kiss you ass goodbye to the Irish nightlife and social life. What absolute nonsense. pic.twitter.com/t9XPl7Pfi6

"Pubs are finished if those images are anything to go by," one person wrote. "People will socialize in one another's homes where they don't have to shout across at their company to have a private conversation".

Some were looking on the brighter side, with one man insisting "Pubs will not look like what McCoy's looked like tonight. No doubt we are in the sh**s but not like that."

Comedian Kevin McGahern said that even if pubs across Ireland do look like this for a time after the pandemic has eased, there is still plenty of room for a bit of craic.

"I've had serious craic in country pubs with people sitting this far apart," he said. "Ideal for slagging in fact".