“I INTEND to be an Ambassador for all seasons,” says Ireland’s new man at the Irish Embassy in London when we meet at his Grosvenor Place residence opposite Buckingham Palace Gardens.

Wearing a blue tie and white shirt, perhaps a nod to his Waterford roots, Dan Mulhall is delighted with his home county’s recent win, claiming the All-Ireland Minor Hurling title in Croke Park after a 65 year drought.

“I’ll accept it as a good omen for my time here in London,” the Mount Sion native jokes.

With over 30 years working with Ireland’s Department of Foreign Affairs (DFA), the diplomat has travelled and experienced much of what the world has to offer.

But his time in London, he feels, could be his most challenging yet. Despite working in Southeast Asia, Australia and India, the Ambassador is, perhaps surprisingly, a new-comer to the English capital and looking forward to embracing the city and the Irish in Britain “with a fresh pair of eyes”.

“Referring back to what was done in Malaysia or Germany or in Australia or elsewhere would be to misunderstand Britain because this country is unique in all kinds of ways,” he says.

“Every day I spend here the more I become conscious of that uniqueness, of that relationship between our two countries. That’s why I will have to treat this as a very particular challenge.”

Admitting he has had little personal experience of emigration - “My mother was one of eight and they all lived their lives in Waterford” – the Ambassador says one of his two main priorities will be to engage with the Irish community here - attending events around the country and meeting key groups.

Having given a speech last month at the Irish World Heritage Centre’s Changing Skies conference in Manchester, the Ambassador decided to also spend two days out and about meeting Irish organisations in Cricklewood and Haringey.

“I’ve a grá for working with Irish communities and this is a country where our work is most apparent,” he says. “I genuinely believe that this engagement has a value for both Ireland as a whole and the Irish community.”

But with over 400,000 Irish-born people living in Britain today he admits it would be a tough task to meet each and every one. Yet that won’t stop this digital diplomat, who plans to embrace Twitter to reach out to those he can’t meet in person. 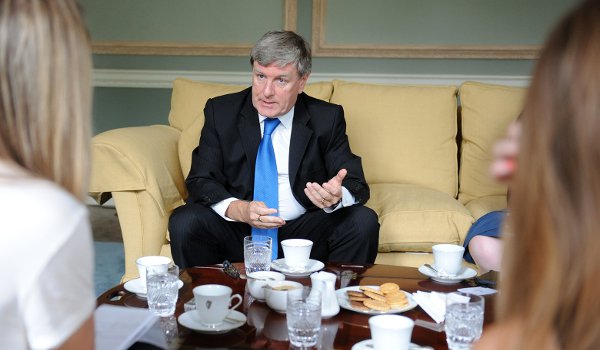 “I’ve gone out there on social media,” says the father-of-two. “I see that as a tool for communication. I want to use it to communicate with the Irish community, to create a community of Twitter followers who have an interest in Ireland, British-Irish relations and Irish community affairs.”

He adds: “I can’t promise to reply to every tweet I receive but I hope people will see this as a sign of openness. Already people are coming up to me at events and saying ‘I follow you’.

"It’s not a substitute for going to events and meeting people personally. It’s an added dimension...we meet people and we also tweet.”

And it’s this openness, along with an ease of manner - perhaps stemming from Mr Mulhall’s work as a DFA press officer for eight years - that has seen him lead a number of successful Ambassadorships around the world. And not one of those postings could be considered a walk in the park.

He was also Ireland’s Ambassador in Malaysia, Thailand, Laos and Vietnam between 2001-2005, making him the Irish Government’s representative on the ground when the tragic Boxing Day Tsunami struck in 2004.

There he faced a great challenge, helping to identify Irish victims, visiting hospitals and getting survivors home safely as part of the Irish emergency response efforts in Phuket.

He arrives in Britain from Germany, with his Australian wife Greta by his side, having spent the last four years at the epi-centre of the eurozone crisis, facilitating meetings between Taoiseach Enda Kenny and Chancellor Angela Merkel.

That economic focus has continued here however, with the Ambassador recently returned from the Global Irish Economic Forum in Dublin.

This latest posting is Mr Mulhall’s second to Britain – he was previously the first ever Consul-General of Ireland in Scotland, a job he left in 2001 to focus on European duties.

“What strikes me is in the last 12 years British-Irish relations have undergone a very profound transformation,” he says.

“Our relations were clearly complicated, with Northern Ireland, but I feel the last clouds have been swept from the sky over British-Irish relations by the Queen’s visit to Ireland in 2011. We’re now in a new era and the relationship is being taken forward.”

Focusing on two priorities during his time in Britain, the Ambassador plans to do what he can to drive Ireland’s economic recovery.

“Our recovery is the underpinning for everything else,” he says. “It will be beneficial not just for Ireland but for the Irish in Britain.”

His second – engaging with the Irish community – ties in with his own “enthusiasm” for that aspect of diplomatic work.

“Britain is the only country in the world where we have a comprehensive community, multi-faceted, substantial and varied,” he says. 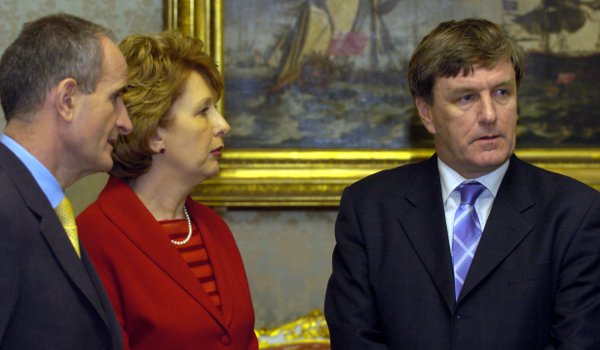 Dan Mulhall (right), as Irish Ambassador to Thailand and Malaysia, meeting President Mary McAleese and her husband Dr Martin McAleese when she held a reception in 2005

“The two go hand in hand, I discovered that in Germany as well,” he says. “People came to the Embassy largely because of an interest in Irish culture but then when they were there they acquired an appreciation of Ireland as an economic and political entity.

“We are not just an economy, but we are not just a culture either. We’re both. But at the moment we really do have a priority to put our country back into a position of sustainable prosperity.”

An album launch celebrating 40 years of Celtic band Clannad and the launch of Irish Writers’ Week were the first two official London engagements for the Ambassador.

“Clannad have created an affection for Ireland in generations of people and other countries,” he says. “And I see that as a part of our national effort to make Ireland the best country it can be. Our culture and our music is part of that process.”

And during his time in Britain, Mr Mulhall hopes he too can enjoy some of the capital’s cultural – and of sporting –  offerings outside his official role.

Within days of arriving, the Ambassador had already sampled some of the city’s theatrical offerings giving his review – on Twitter naturally – of Jermyn Street Theatre’s Doonreagan.

A self-proclaimed enthusiast for Irish literature (the Ambassador is also the author of a book on late 19th century Ireland) he hopes to share his love of the arts with visitors to the Embassy.

“Particularly the great writers – Joyce, Yeats, O’Casey and so on,” he says. “But I don’t neglect modern Irish writers. Recently in Germany I gave a night of readings and I decided that I would prove we were not a dead poet’s society.

"I wanted to show our literature was not a museum piece, that it was a vibrant living tradition. So I read from Kevin Barry’s City of Bohane. They were quite struck by it.”

He adds: “I’m a sporting enthusiast of the highest order too. My son lives in London so it’s a chance to be a spectator at sporting events that I’ve been following on the television for many years – football, rugby, Gaelic football, hurling, I will do it all. I promised out at Ruislip that I would come out and support London GAA next year.”

And so as we head into the winter months, the steady spring in Ambassador Dan Mulhall’s step is clear to see as he sets his sights on winning the hearts and minds of Britain’s Irish community.