AN IRISH artist in Manchester has created an incredible painting of Caitlyn Jenner from the negative tweets about her Vanity Fair cover earlier this year.

Conor Collins, 26, decided to take the transphobic abuse and create something much more meaningful with his artistic flair.

“I wanted to show that iconic image of her but also show the horrible side of society,” Collins told The Irish Post.

Jenner, formerly known as Bruce, came out as a transgender woman in April of this year, revealing herself on the cover of Vanity Fair in June.

While the majority of the reaction to Jenner was overwhelmingly positive, Collins found that a steady flow of negativity was coming through on Twitter – and it shocked him. 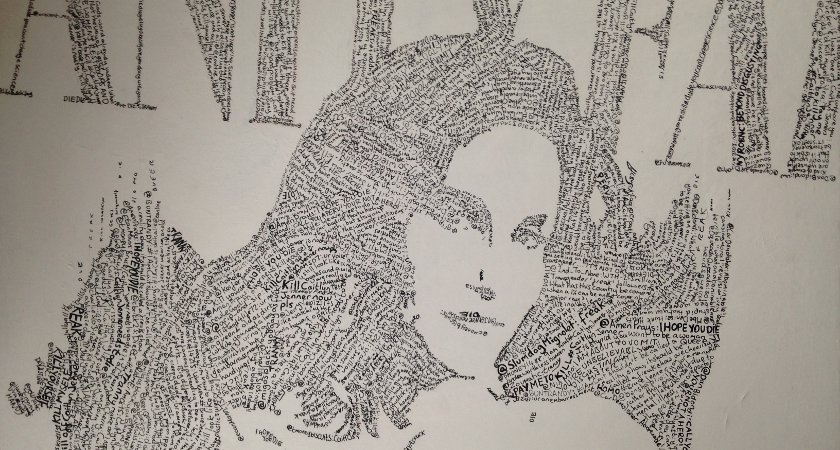 A close up of the image reveals the content of the tweets.

The portrait of Jenner is going down well and Collins hopes the attention will put focus on the abuse experienced by the trans community.

“I was following what was happening with Caitlyn and started seeing a lot of dark tweets,” he said.

“One of them said ‘someone pay me to kill Caitlyn Jenner’ so some of them were really beyond dark and just disturbing.”

“Caitlyn is doing so much for the trans community. She has her security around her and has been able to transition but for so many others it’s not like that. So far this year I think 17 trans people have been murdered in the US alone for transitioning.”

“So I wanted to show people the iconic image of Caitlyn but also highlight this side of society,” he added.

Collins, who was raised in Kent by parents from Cork and Kerry, also revealed that he needed Dutch courage to research tweets for the painting.

“I was actually drinking while I was painting,” he said. “The tweets were really, really horrible so it was getting to me.”

The next morning, he had a near-finished acrylic canvas in his living room and spent the next two days tidying up mistakes until the painting was complete.

The image has already received hundreds of retweets on his Twitter page – and it is not the first time he has turned negativity into something more positive.

Last year, his similar image of Tom Daley went viral online after he created a painting of him from the negative tweets about the diver’s sexuality.

Collins normally sells his artworks but kept the Tom Daley one for sentimental reasons – but his portrait of Jenner may be going to a good cause.

“I won’t sell it for profit but I might give it to a charity to raise funds or something if I don’t keep it,” he said.

My finished portrait of @TomDaley1994 made out of the homophobic tweets sent to him when he came out. #art pic.twitter.com/SUjrknKal9