AN IRISH DENTIST has won the award for Caring Dentist of the Year after he helped a woman who had broken her tooth in a domestic violence incident.

Dr Pádraig O’Reachtagáin, from Co. Tipperary, fixed the woman's tooth before showing her a way for her and her children to get out of their abusive situation.

The woman, who wishes to remain anonymous, says that Dr O’Reachtagáin opened his practice up on Castle Street Dental Practice in Roscrea on a Saturday to treat her, despite the fact the dentist was normally closed.

"He was caring, compassionate, and also advised me on the avenues I could go down to get myself and my children into a much safer environment," she said. 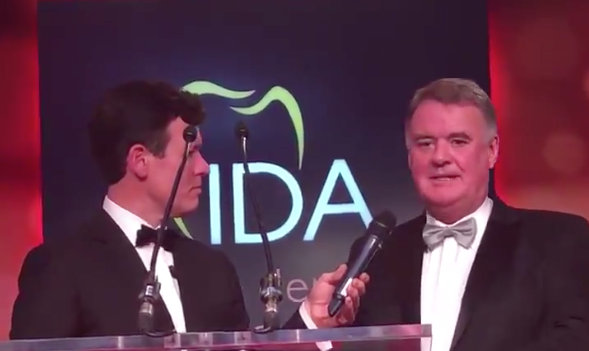 "I can’t express how thankful I am. He not only repaired my tooth but showed me a way to get out of a violent situation.

"Myself and my children are now safe due to his care and understanding. He truly deserves this award."

The woman nominated Dr O’Reachtagáin for the Colgate-sponsored award, but after winning, the dentist insists that the real winner was the woman "who took the courageous step to get herself and her children out of an abusive situation."

"If other victims of abuse are inspired by this woman’s story and see that it is possible to get out of these situations, that will be a real result," he added.

Dr O’Reachtagáin mentioned that he worked in London for a time during the 80s in an area close to a refuge for victims of domestic violence.

"From treating those women, I learned that domestic abuse and violence was a lot more prevalent then we all like to think," he said.

"I also learned that it was an issue which while shrouded in secrecy affected women from all walks of life."

President of the Irish Dental Association Professor Leo Stassen praised Dr O’Reachtagáin for his generosity of spirit and professional dedication.

The woman received a cash-prize of €1,500 for her winning nomination, but it's understood that she's donated the money to Women's Aid.

Colgate have reportedly said they are "delighted" to match the donation.