What the teeth of the men, women and children who died in the Great Famine tell us

THE extracted teeth of Irish Famine victims have shown scientific evidence that the men, women and children who died experienced earlier periods of starvation prior to the Great Famine of 1845 to 1852.

The study, which is the first of its kind, was conducted by Dr Julia Beaumont of the University of Bradford, and Dr Janet Montgomery of Durham University.

The teeth used for the study were extracted from bodies in the Kilkenny Union Workhouse Famine burial ground.

Speaking to The Irish Post, Dr Beaumont explains how the discovery was made, saying, "We've found over the years that by extracting collagen (a protein found in bones and teeth) and measuring it for carbon and nitrogen levels, we can tell what people are eating when the tooth was growing."

Potatoes and maize have very different carbon values, so the idea was we could spot when they stopped eating potatoes and started eating maize, and that's important because historically, maize was the relief food given to people who were starving during the Irish Famine.

With the Irish Famine victims Drs Beaumont and Montgomery looked at, they already knew from history that they had been eating potatoes and maize.

"Potatoes and maize have very different carbon values, so the idea was we could spot when they stopped eating potatoes and started eating maize, and that's important because historically, maize was the relief food given to people who were starving during the Irish Famine."

When studying dietary history in the past, scientists had looked at a sample of bone from the rib, which only gave the average diet of that person for the previous five years. Using teeth, however, is more exact. 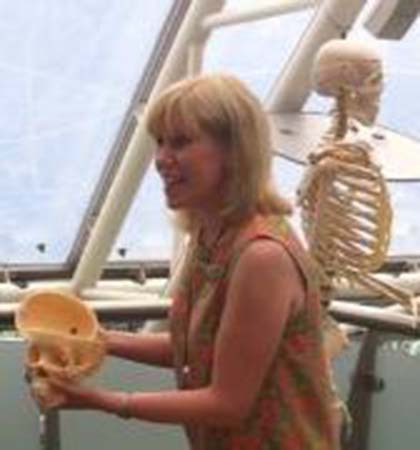 "If we were to take one of your teeth," Dr Beaumont says, "and chop it into small sections, we would know what you're eating at different periods of your childhood when that tooth was growing. The thing with teeth is that we can get much better time resolution so we can see short term changes in diet, like the potatoes to the maize, that we can't see in bone because it averages it. Not only can we see the short term changes, we can now identify periods of nutritional stress."

What the doctors found when they looked at the teeth of the child famine victims, Dr Beaumont says, is the the "novel" part of the study.

"Just before we see the changes in the diet of the children in the famine cemetery [from potatoes to maize], the nitrogen level rises and the carbon level drops. That's really unusual, as in dietary terms, there's very very little that you can eat that will make that happen. From the documentary evidence and what we know about people in Ireland at the time, they would not have been eating anything at that time to cause carbon to drop and nitrogen to rise like that."

"The only other explanation is that these children, just before they got the maize," Dr Beaumont continues, "they were starving, so what they were doing was recycling the existing proteins in their body, and that makes the nitrogen rise. The carbon is dropping because they're burning up their fat stores and if you release your fat into your body, that has a lower value for the carbon."

Dr Beaumont explains how using this method can be implemented to map the dietary stress of the Famine people.

"With the Irish Famine, we know what they're eating and we know when they changed their diet, so if we see this marker [potatoes and maize] just before then, we can be sure we're identifying starvation."

The study was originally started in 2012 by Dr Beaumont. Dr Montgomery later collaborated on the study, The Great Irish Famine: Identifying Starvation in the Tissues of Victims Using Stable Isotope Analysis of Bone and Incremental Dentine Collagen which can be read in full here at PLOS ONE.