A YOUNG IRISHMAN was left seriously injured after stopping a gang of youths from attacking a dog in Derry.

The family of 24-year-old Aaron 'Harry' Doherty said that he sustained head and facial injuries during the altercation which has left him in hospital.

'Animal-loving' Harry was apparently returning home on July 12 when he saw the incident in the Marlborough area of the city.

He'd had been visiting a friend’s house in the Fernabbey area and was returning home in a taxi when he saw a dog being attacked by a gang of around 15 people, with bottles and stones on the Skeoge Road.

The young man stepped in to stop the attack, but paid for his bravery as he was himself assaulted by the group.

He was transferred to the Royal Victoria Hospital in Belfast due to the seriousness of his injuries, and despite suffering intense pain and a bleed at the back of his skull, a procedure this week has shown there are no signs of any aneurysms. 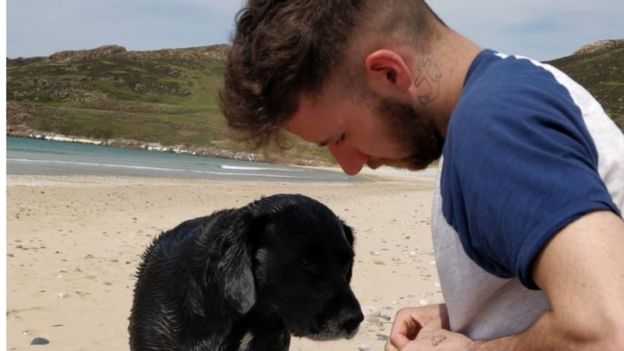 Aaron's stepfather Gerry Doherty said the family has been "living a nightmare" since the attack.

"Because of these guys attacking this dog, he intervened. But he has ended up in a nightmare situation himself and indeed we are in the nightmare with him," he told the BBC.

He said Aaron would have felt compelled to intervene.

"He is a very passionate guy about animals and particularly about dogs.

"Harry is the type of guy who would be walking along and if a dog was in the river he would jump in, he wouldn't think twice and he wouldn't be a great swimmer. It is an instinct in him".

His family are now appealing for anyone involved to come forward and help the police identify the culprits of the attack.

"My appeal is to the others in that group of young people, particularly the younger ones, to tell their parents what they know," said Aaron's stepfather.

"Some young boy could be sitting now in their bedroom not knowing what to do or where to go. I would urge them to speak to their mothers and fathers and tell them 'I was there'.