'Irish must stand with Muslim, black and other ethnic minority groups against Ukip in Britain'

THE Irish must offer a “hand of solidarity” to black, eastern European and other ethnic minority communities who face the brunt of xenophobic notions in Britain, claims a leading London professor.

Speaking at an event to mark St Patrick’s Day at the London School of Economics, resident Professor of Human Rights Law Conor Gearty claimed the Irish are the “best immigrant community” to flush out racist politicians and policies as “they don’t think of us as immigrants”.

“This country is taking a turn towards English xenophobia, which is completely at odds with the whole culture in this country, but it is being driven by the Ukip crowd,” he claimed, while taking part in a panel discussion tackling the future of Britain, Ireland and Anglo-Irish relations.

“He says he doesn’t but Farage wants to have signs up in Britain saying ‘No Irish’, but they don’t mean Irish, they mean people who are not white and eastern Europeans.

“We, the Irish, should push them out,” he added. 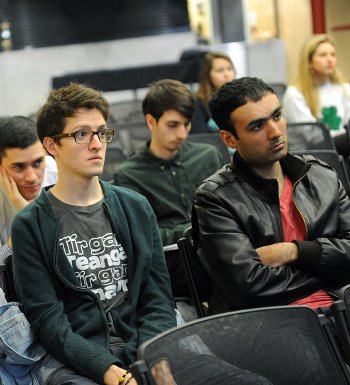 In an impassioned plea to those gathered for the event at the LSE’s new Saw Swee Hock Student Centre on March 17, Dublin-born Prof Gearty called for the Irish to take a stand against Ukip ahead of the general election.

“These [Ukip] are a bunch of racists,” he claimed.

He added: “I think the Irish have a moral responsibility to say you can’t just pick and choose immigrants. You can’t run a racist policy pretending it’s a fair policy. That’s what they are doing and we can flush them out - we are the best immigrant community to do that because they don’t think of us as immigrants.”

Regarding the impending election Prof Gearty warned that a Conservative win could well be on the cards, claiming the Irish should be prepared for it - along with Britain’s ultimate exit from the EU.

“I think we need to acknowledge the possibility that the Conservative Party will win the next general election,” he said.

“They have been drafting policies on the basis that they won’t, but I think there is a possibility that they will – either alone or with their sister party Ukip. Now this is a really quite important sea change in British culture if it happens and I have absolutely no doubt that the Conservative Party, which is an English national party, doesn’t give a damn about Scotland, Wales or Ireland and they probably have never read the Good Friday Agreement.”

The outspoken Irish academic, who graduated in law from University College Dublin before moving to Cambridge in 1980, where he studied for a master’s and later a law PhD, has published widely on terrorism, civil liberties and human rights topics over the years.

As he marked St Patrick’s Day with the members of the LSE Irish Society, who organised this week’s panel discussion, he further called on the Irish to stand with their Muslim peers as they face life in Britain as a “suspect community”.

“We as a community were described in the 1970s and 80s as a suspect community,” he said.

“It was a good description of the situation then, but we have got past that.”

He explained: “We were the victims of brutal behaviour in courts by the authorities, victims of police brutality in places like Kilburn and some of us were exceptionally unlucky as victims of vicious actions by the justice system, marooned in jail for years for no reason, when anybody who knew anything knew there was no reason.

“We have suffered as a community but it is our moment to extend the hand of solidary to communities who are now suffering in the same way," he added.

“It’s time for Ireland to give something back and to actually stand up and extend a very public show of solidarity to Muslim communities that are fearful of police abuse and terrified that their children are going to go off to Syria and will be jailed on their return - it is time for us to join with those communities in explaining that what wasn’t good enough for the Irish is also not good enough for them.”