PLANS to film more scenes for the yet-to-be-released Star Wars Episode VII on one of Ireland’s most important heritage sites have been met with backlash.

Ireland’s national trust, An Taisce, is clashing with the Government and filmmakers over plans to do a second shoot for the upcoming blockbuster on Skellig Michael.

It is currently breeding season on the island with hundreds of marine birds flocking to Skellig Michael to have their young this August and September.

An Taisce believes the film crew arriving on Skellig Michael, a UNESCO World Heritage Site situated 12km off the coast of Kerry, may be detrimental to birds such as Manx Shearwaters.

They voiced concerns that cargo boats bringing equipment and crew to the island would introduce rats. Skellig Michael currently has no rats – which allows the birds to thrive.

The organisation's environment and heritage officer Ian Lumley has strongly criticised the plans in a letter to Minister for Arts, Heritage and the Gaeltacht Heather Humphreys. 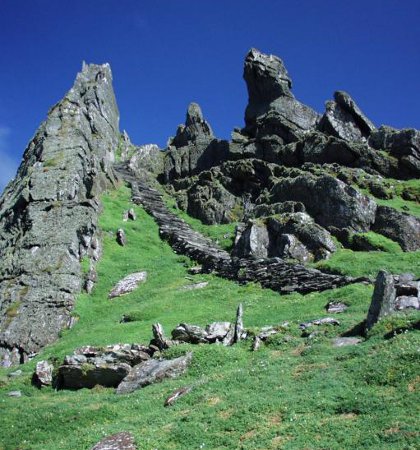 The island is known for its unique landscape. Picture: WikiCommons

"Any impact compromising its protection and violating its meaning in the world, as well as threatening its fabric, its ecology, and the unique combination of both which make up its essence, should not be permitted."

Scenes for the upcoming Star Wars Episode VII, which stars Irish actor Domhnall Gleeson, were first filmed on the island in August 2014.

The shoot was met with widespread criticism last year as shooting also took place during breeding season for the island's birds.

But it is not just wildlife on the island that will suffer, An Taisce believes.

Skellig Michael is home to a sixth century monastery and Mr Lumley believes the existing structure’s “fragility” means the film crew should not involve the remains in the shoot.

Mr Lumley also called on the Minister to clarify the legal status of filming on an important heritage site.

If it goes ahead, filming will take place at Skellig Michael again from September 13-16, with an expected release date of December 18 for the blockbuster movie.