The Stewart Arms pub in Notting Hill displayed the poster for two decades before taking it down this week.

THE Irish manager of a London pub has hit back at ‘keyboard warriors’ calling for a boycott over the display of a ‘slave auction’ poster.

The Stewart Arms in Notting Hill has come in for scathing criticism on social media after a user posted a picture of the vintage print.

The ‘slave auction’ notice from July 1820 lists the names of a number of African-American labourers who were up for sale – one of which was just 14 years old.

The poster has now been removed by pub manager John Connelly, 55, who has taken aim at those accusing the pub of “glamourising” slavery.

Mr Connelly only began working at the pub recently, but said the poster had been on display for 20 years.

“It’s an old print of years gone by and nobody's ever taken offence to it before but it has now been removed,” he told MailOnline.

“It's one of these things that nobody ever thought would upset anyone.

“When pubs go through a refurbishment bric-a-brac tends to be put on the walls – a lot of it relating to certain historical times.

“It was put up God knows when and regular customers have definitely not taken offence to it in the past. It has been removed and it will not go up again. 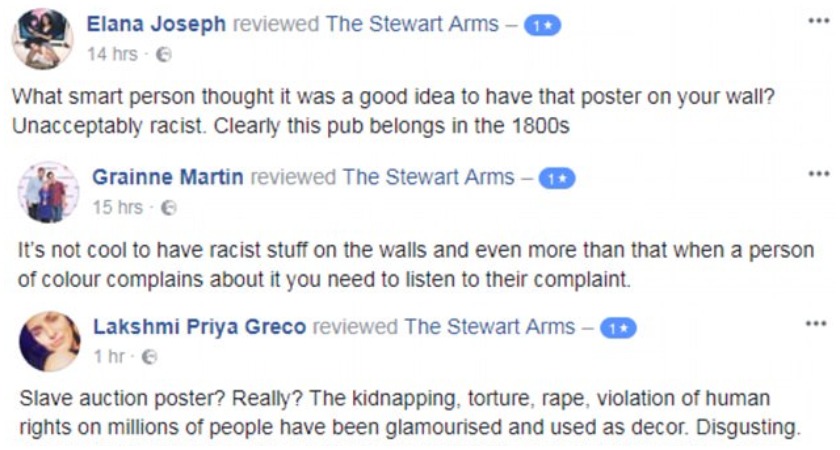 “It's a very favourable pub and we've got a very mixed clientele. It was one person who complained – a chap and his girl who I didn't recognise who came in on Friday night.

“The poster was on the wall by the pool table and they obviously took umbrage to it. They made a comment to one of the staff and walked out because of it.

“It has been removed and we had no intention of upsetting anyone. It's been there for so long. It came down the following morning straight away.

“When you're in a pub sometimes you don't notice what memorabilia is on the wall because it's quite big”.

Mr Connelly added: “I've only been here for two months, the people who own this building have had the lease for ten years.

“Pubs in the city have stuff like that on the walls and no one says anything. We're either going to put something else up or leave it blank.

“No one had mentioned it before, it's just keyboard warriors and it's completely over the top.

“Technology is great but it's got way out of hand, way beyond anything.”

Mr Connelly was responding to a number of Facebook users who are now calling for locals to stay away from the pub.

One wrote: "Disgusting. The kidnapping, torture, rape, violation of human rights on millions of people have been glamourised and used as decor.

"I hope this place crashes and burns for their dismissal of a very serious issue. Don't go here".

Another said: "It's not cool to have racist stuff on the walls and even more than that when a person of colour complains about it you need to listen to their complaint".

While a third added: "Avoid this place and don't support its racist owners!"