Malian anti-terrorist special forces "Forsat" members and investigators walk at the entrance of the Kangaba tourist resort in Bamako on June 19, 2017, a day after suspected jihadists stormed the resort, briefly seizing more than 30 hostages and leaving at least two people dead. The assault on the resort comes after a similar strike less than two years ago on a luxury hotel in Bamako, which lies in the south of the troubled country. Four assailants were killed by security forces, Mali's security minister said late June 18, without specifying if. / AFP PHOTO / HABIBOU KOUYATE (Photo credit should read HABIBOU KOUYATE/AFP/Getty Images)

TWO IRISH soldiers have been confirmed safe after a terror group linked to Al Qaeda opened fire at a hotel in Mali, killing five people.

The terrorist group stormed the Le Campement hotel in Dougourakoro in Mali, on Sunday, June 18, and battled with French and Malian special forces deployed to try to free guests trapped inside.

A spokesman for the Irish Defence Forces said that two Irish soldiers, who had been in the hotel when the attack occurred, had been located.

A new alliance of Islamist militant groups linked to Al Qaeda claimed responsibility for the attack at the luxury resort, according to Reuters.

The Irish soldiers have since returned to the European Union Training Mission's (EUTM) Headquarters in Mali's capital, Bamako. 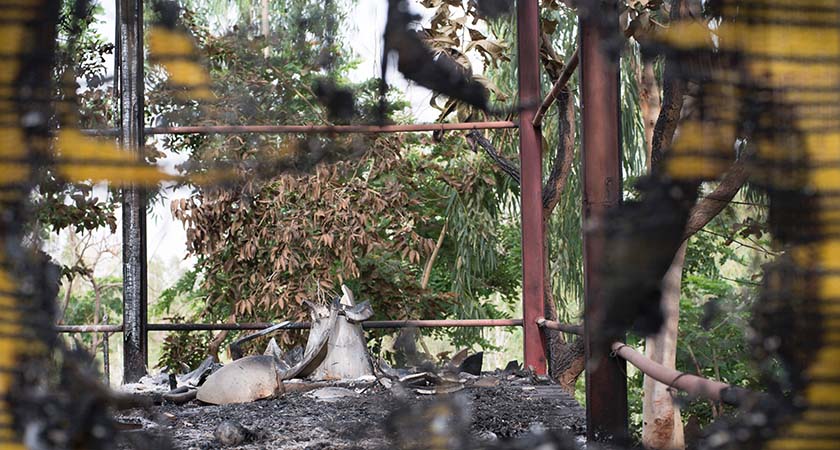 A picture of the tourist resort near Bamako shows remains after suspected jihadists stormed the resort on June 18. (Picture: MICHELE CATTANI/AFP/Getty Images)

Ireland's Minister for Defence, Paul Kehoe expressed his condolences for the deceased but said risk cannot be eliminated for Irish soldiers serving in unstable environments.

“I wish to express my condolences in respect of the guests of the Le Campement Hotel, Dougourakoro killed and injured in Sunday’s incident," he said. 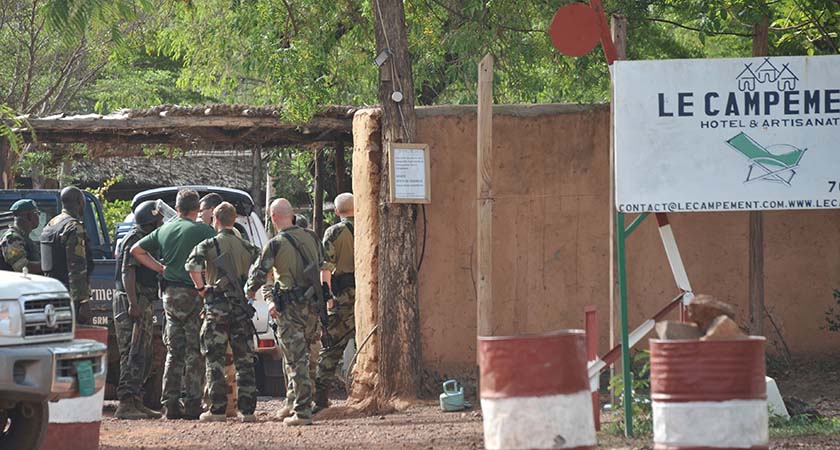 European forces and Malian anti-terrorist special forces "Forsat" members walk at the entrance of the tourist resort on the edge of Bamako on June 19, 2017, a day after suspected jihadists stormed the resort. (Picture: HABIBOU KOUYATE/AFP/Getty Images)

"Every effort is made to ensure the safety of our personnel on overseas missions, but given the inherent instability in the environments in which they operate, risk cannot be fully eliminated.

"A report on the matter will be compiled by the Chief of Staff, and any support which may be required by Defence Forces personnel in Mali and their families following the incident will be made available," Minister Kehoe added.

Irish Defence Forces have been deployed to Mali since February 2013 as part of a European Union training mission to assist the Malian armed forces improve their military capacity and guarantee territorial integrity.

Currently, 18 Irish personnel are serving with EUTM Mali, seven of whom occupy staff appointments in the mission Headquarters in Bamako, while 11 are based in Koulikoro Training Centre.