Irish take shelter from WWII bomb... In The Parish Bar in Wembley

IN 1943, they sheltered in the tube tunnels as bombs fell from the sky during World War II - but in 2015, they headed for The Parish Bar.

Last Thursday was pandemonium in Wembley Park, North London, when emergency services were called to investigate a suspect device.

The device turned out to be an unexploded WWII bomb – just yards away from Wembley Stadium.

Mick O’Meara, who owns The Parish, was among those getting the pub ready for a run-of-the-mill Thursday morning.

“It was like any normal day, the lads were in getting the pub ready and getting the stock in,” he said. “Then we heard all the sirens and everyone was being evacuated, so next thing we know people started walking into the pub.” 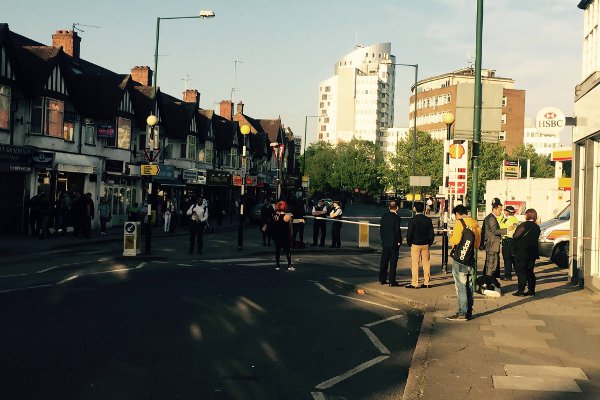 The edge of the exclusion zone, as seen from the front door of The Parish Bar.

Luckily for The Parish, and its punters, the pub was just outside the exclusion zone, meaning it was the ideal spot to watch the action unfold while sipping a pint, on an unexpected day off.

“The boys were joking that if they were going to get blown up, they might as well get blown up with a pint of Guinness in their hand,” Mick laughed. “The bomb was only about three or four hundred yards from the pub so we were right in the thick of it.”

It was the following day before emergency services made the area safe – but the pints were well gone by then.

Seventy years ago, people were sheltering in the tube tunnels to avoid the explosions – but this year, there was more comfort on offer in The Parish.