AN INTREPID Irishman has completed a mammoth 2,500km trek from Austria to Ireland to benefit Dementia Research.

Eamonn Donnelly, 50, arrived in his native Keady in Co. Armagh yesterday to a hero’s welcome after completing ‘The Long Walk Home’.

His friend Sepp Tieber-Kessler accompanied him for 12 weeks from Graz, Austria all the way to Dublin before heading home for family work commitments a fortnight ago.

But Eamonn didn’t have to complete the final leg from Dublin and Armagh alone as he was accompanied at various stages by family, friends and members of the public – who were all invited along to cheer him on.

He was welcomed home to Keady by the Lord Mayor Armagh City, banbridge and Craigavon, Gareth Wilson as well as members of the Alzheimer’s Society and the local community.

The trek was inspired by Mr Donnelly’s mother Margaret who died in April 2014 at the age of 71.

She suffered from a rare and extremely aggressive form of dementia.

Eamonn said he hopes that his journey will help increase awareness about the importance of the issue of dementia wherever the condition rears its head. 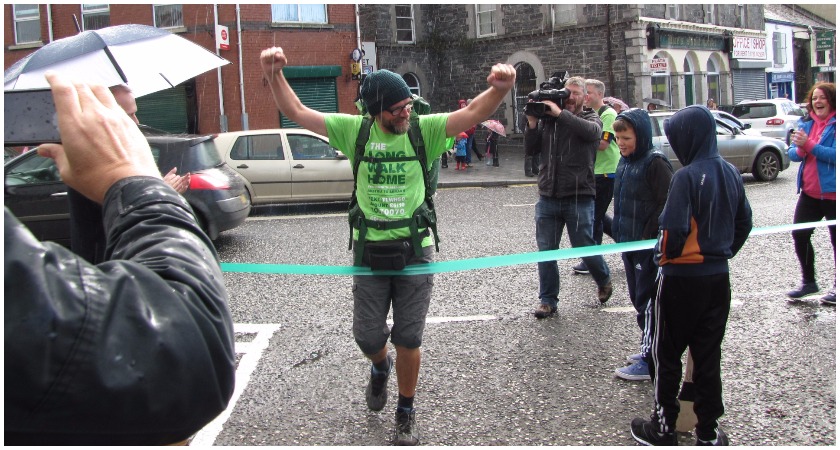 He also hopes the funds he has raised for the Alzheimer’s Societies of Northern Ireland, Britain and Ireland – who will each benefit from funds raised by the expedition – will ease pressure on dementia sufferers and their families.

“The Long Walk Home has been very challenging both physically and mentally,” an understandably exhausted Eamonn said after arriving home in Armagh.

“The fact that I both turned 50 and became a grandad for this first time, since I left home 12 weeks ago, has made it feel all the longer.

“Along the way however, Sepp and I were greatly encouraged by the interest from the public about the walk and the important messages behind it.

“As we have walked, we have generated a lot of attention and debate about dementia from those we have met directly on the walk as well as through media exposure and interviews as well as engagement online through our blog and social media channels.”

He added: “We have also been raising money to support dementia research and would like to thank everyone who has donated so far, as well as those who have supported us with generosity and hospitality along the way.”

If you would like to make a donation to Eamonn and Sepp’s dementia cause, you can follow the link here.