A NEW portrait of the Queen painted by Irish painter Colin Davidson has been unveiled by the monarch in London.

Queen Elizabeth II unveiled the portrait at a Cooperation Ireland reception held at Crosby Hall earlier this week, as part of an ongoing effort to further improve relations between Britain and Ireland.

The relationship between Britain and Ireland has improved significantly in recent years, particularly following the Queen’s visit to Northern Ireland in 2012 when she and McGuinness shook hands.

Speaking to the BBC, Mr Davidson said that he felt his portrait was a “symbol” of the Queen’s contribution to Britain and Ireland’s improving relationship.

"I have witnessed over many years the Queen's actions in advancing healing within the Anglo-Irish relationship. 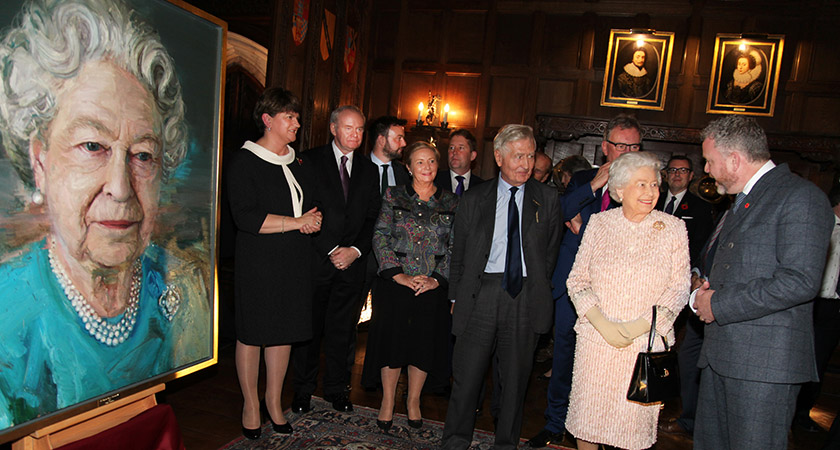 The Queen with Colin Davidson at the unveiling of the artist's portrait [Picture: Joanne O'Brien]
"That does inform the weight of the painting and it informs my attitude to it as well.”

Her Majesty wore the dress at a Buckingham Palace sitting back in May, which Mr Davidson used to produce the portrait.

The Northern Irishman had merely 90 minutes in the Queen’s presence with which to organise the work.

He has previously produced portraits for prominent figures such as German Chancellor Angela Merkel, Nobel Laureate poet Seamus Heaney and Hollywood actors Brad Pitt and Liam Neeson – but admitted the Queen’s daunted him most.

"I sometimes wonder why I choose to be in the same room as the person whenever any of the portraits are unveiled," he said.

"It's a scary time. But, in some ways, whenever the painting is out of the studio it's out of my hands."

Many artists and photographers have been honour with depicting the Queen, but judging by her grin this Irishman's effort appears a winner.