A WOMAN born in Vietnam but raised in Ireland has shared a cartoon depicting the disgusting racial abuse she has received.

Úna-Minh Caomhánach was raised in Kerry after she was adopted by a local woman.

She has been fluent in Irish since the age of three, but says she has regularly received a number of racial insults growing up as an Asian Irish woman.

Taking to Twitter, the 25-year-old writer posted an image of a cartoon she drew to illustrate the most common abusive comments she has received.

"I drew this because it has happened to me again and again. These are real comments and racial slurs from very real people," she said.

The post has since received widespread attention online with Ms Caomhánach praised for her courage in the face of appalling remarks such as “ching chong” and “slit eye weirdo”.

The cartoon features a raft of insults hurled at Ms Caomhánach over the years including “you will never be Irish”, “go back to your own country” and “your English is so good”.

Father Ted creator Graham Linehan shared Ms Caomhánach’s cartoon and said that the abuse she received was “shameful”, adding that it reminded him of how he and his writing partner Arthur Matthews came to write the episode ‘Are You Right There Father Ted?’

The episode features racial abuse directed towards Chinese people and was inspired by a racist incident Linehan witnessed in New York.

Shockingly, Ms Caomhánach’s cartoon attracted further racial abuse, which she then publically retweeted to her thousands of followers. 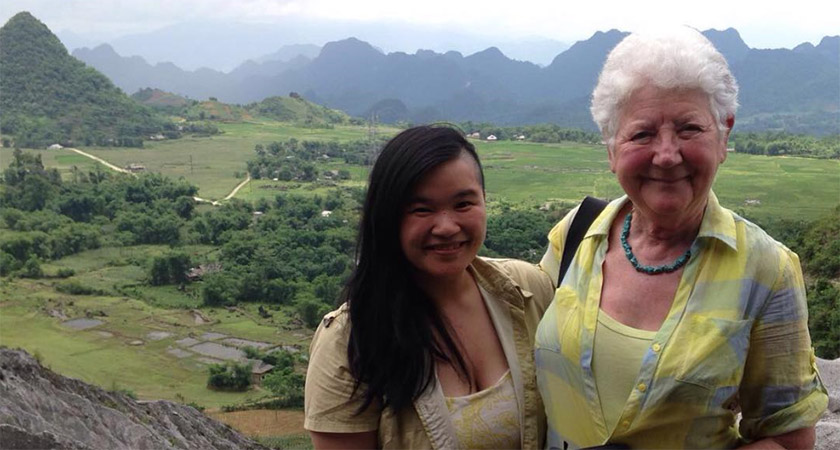 Una runs the blog 'Before My Mam Dies' and is seen here with her mother in Vietnam. Picture: Úna-Minh Caomhánach

One user even told her that she was “not Irish” due to her race.

"Incidentally, the racial attack directed at me at the very top of that drawing? This is the full version sent to me by PM," Ms Caomhánach wrote.

“Also just want to stress again I'm totally grand. This stuff just NEEDS to be highlighted not pushed under the rug.

"Just do me a favour, please don't tell me to just ignore them because that's easy to say when it's not happening to you online and offline."

In 2013, Ms Caomhánach was subjected to a sickening assault in which she was spat on in the street and branded a “chink”.

She said at the time: “Was just spat at by some gobsh*te children who also called me a chink. Hope they grow up to nothing. I hate Ireland sometimes.

“Very shook after it. I'm used to having slurs thrown at me but never spat at or touched.

“If you're white and Irish, you're very, very lucky by the way. Being Irish and a ‘chink’ is an uphill struggle.”

Ms Caomhánach currently runs the popular blog 'Before My Mam Dies', a travel blog featuring herself and her mother who is a retired teacher.

She writes that the blog's aim is to help "see more of the world with my Mam in the time we've got left."