THE WIDOW of the late Jack Charlton has thanked the people of Ireland for their tremendous love and support since her husband's passing.

Mrs Pat Charlton issued a statement through the Football Association of Ireland (FAI), whose online book of condolence for the football legend garnered tens of thousands of messages.

In the heartfelt statement to the people of Ireland, Mrs Charlton said she was "so grateful to everyone in Ireland who has taken time out to send us their condolences".

"It means so much to me and to the family to know that Jack meant so much to everyone in Ireland and I would like to share this message with the Irish people."

“Jack loved his time with the Irish team and it is clear from all the cards, letters and flowers that have arrived at our house just how much the people of Ireland loved him as well.

Pat Charlton with her and Jack's grandchildren John (12), Niamh (10) and Róisín (7) with flowers and crads sent by supporters following 'Big Jack's' death earlier this month (FAI)

“I cannot tell you how much that means to me and to John, Deborah and Peter and all the family as we try to come to terms with Jack’s passing. Every day we have received more messages, more cards and more flowers from Ireland, from England and all across the world.

“It has given me great comfort to see all those letters arrive from Ireland and to see the reaction to his death right across the country.

"To know he was so loved in Ireland means such a lot to us all, it really does.” 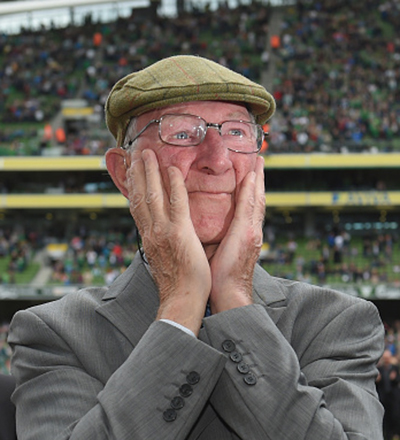 Jack Charlton reacts to a standing ovation from Irish supporters during a firndly match against England in DUblin, 2007

Big Jack's eldest son John, who celebrated Ireland's big wins countless times with his father and the Irish team, said that while they are "still coming to terms" with his father's passing, "all the support we have received, here in England and from Ireland, has made such a difference for the family".

“I know thousands of people would have travelled from Ireland to say goodbye to my dad at the funeral but for COVID-19 and I know they marked the day right across Ireland which we are so grateful for," he said, adding that there were plenty of Irish tricolours present at his father's funeral in England. 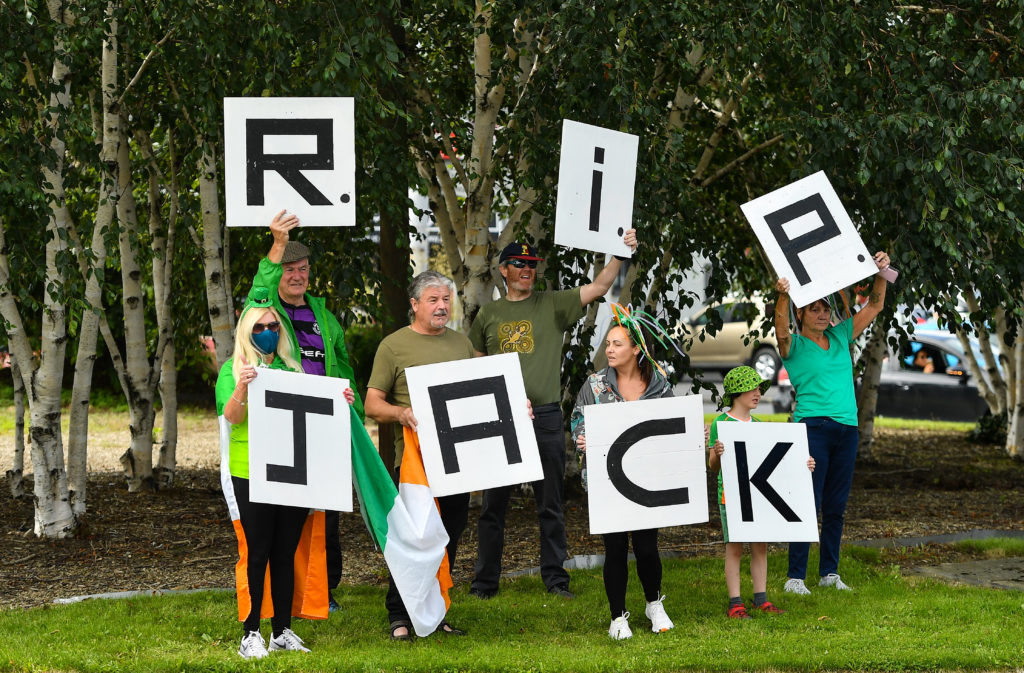 Irish supporters gathered in Walkinstown, Dublin to show respect to the passing of former Republic of Ireland manager Jack Charlton, on the day his funeral was taking place in England (Photo By Seb Daly/Sportsfile via Getty Images)

“I want to thank them all on behalf of the family. Some of those who have written to us had met my dad over the years, others are just fans who wanted to say thank you and to sympathise with us all.

John went on to say that once the time is right and it can be done safely, the FAI and the family will be organising a proper "Irish send-off" for the legendary Jack Charlton.

"But in the meantime, we want to thank you all for everything over the last fortnight.

"Your support has been really special for us all."