Life sentence for ‘cold, calculated’ stalker who stabbed ex-girlfriend to death in a car park

AN EX-BOYFRIEND who stalked his former partner before stabbing her to death in a pre-planned attack in a shopping centre car park has been found guilty of murder.

Joshua Stimpson was sentenced to life imprisonment yesterday and will serve a minimum of 26 years before being considered for parole.

The 26-year-old brutally attacked Molly McLaren, 23, stabbing her more than 75 times and causing significant injuries to her face, neck and arms, as she sat in her car on Thursday, June 29, 2017.

Stimpson, of Wouldham High Street in Rochester, admitted killing Miss McLaren but denied murder, claiming he was suffering from diminished responsibility and could not remember the incident or the two weeks prior. 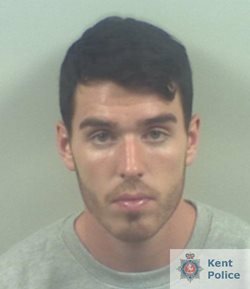 Stimpson has been jailed for life

The case was investigated by detectives from the Kent and Essex Serious Crime Directorate.

In the days before Molly's death, Stimpson was witnessed on CCTV buying the murder weapon – a four-inch knife – and attending the same bar as her.

On the day of the murder, footage was shown of Stimpson attending the same gym as Miss McLaren and setting up an exercise mat beside her.

He left shortly before 11am, and Molly sent a message to her friends saying: ‘Feel like I’m… looking over my shoulder all the time.’

Stimpson waited in his car and watched the entrance of the gym until she entered the car park. He then pulled up close to her vehicle as she prepared to drive home and left the engine running as he left his car, pulled her car door open and lunged at her with the knife.

Emergency services attended within minutes but, despite their efforts, could not save Ms McLaren’s life as she had suffered injuries she could not have survived from.

She was pronounced dead at the scene.

Dozens witnessed the attack with one man trying to intervene by shouting, hitting the bonnet of the car, and pulling at Stimpson’s leg.

Officers attended and arrested Stimpson. A box cutter and a pickaxe were found in his car. 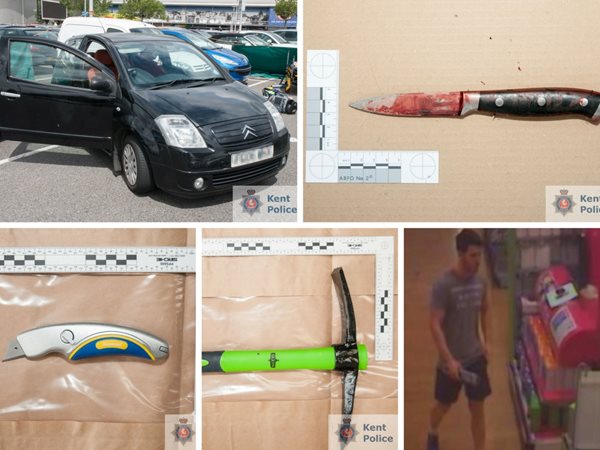 A jury found Stimpson guilty of murder yesterday, following a two-week trial at Maidstone Crown Court. He was sentenced to life imprisonment the same afternoon.

Senior investigating officer Detective Sergeant Ali Worton said: “Molly was a popular and ambitious young woman with her whole life ahead of her but this was stolen by Stimpson in the most brutal way imaginable.

“He has proven to be an extremely dangerous individual and needs to spend a lengthy period of time in prison where he can cause no further harm to innocent people.

“It was clear to the jury and us that Molly’s death was pre-planned and that Stimpson is a cold and calculated killer rather than somebody who does not have the mental capacity to control himself.

“By denying murder and failing to accept responsibility for his actions, he forced Molly’s family and friends to suffer even further distress through the tough ordeal of a crown court trial.

“I would like to pay tribute to Molly’s family for the strength and dignity they have shown throughout and I hope this result is of some comfort.

“I would also like to thank the police officers and ambulance staff who attended the scene of Molly’s death and fought valiantly to save her. They face difficult situations on a daily basis but this was one that will certainly live long in the memory and I am keen that their efforts are recognised.

“Finally I would like to express thanks and recognise the courage of the members of public who tried desperately to stop the attack on Molly.”

A statement from Molly’s family said: “The last six months have been horrid beyond belief.
'We couldn’t have got through it without the love and support of family and friends.

'The number of Molly’s friends has staggered us, the like of which we have never known.  Those that have visited and shared in our pain have been a great help.

“The full extent of the digital stalking of Molly by Joshua Stimpson may never be known.
'We would like to thank Benjamin Moreton for his brave efforts at the carpark when he tried to intervene, and hope one day to thank him personally.

“The contrast in morality between these two people could not be more profound."