THE IRISH DIASPORA in the Wood Green area of London got a welcome surprise in April with the reveal that the new owner of Monaghan’s Tavern on the High Road was none other than Seamus Moore, the ‘JCB man’ himself.

“The sign might say Monaghan’s but everyone now knows it as Seamus Moore’s bar,” Seamus says, grinning. Which isn’t surprising - if his van, which is perpetually parked outside the front doors, announcing himself as Seamus Moore the JCB Man didn’t give it away, then you couldn’t miss what’s on the side of the pub: a massive mural showing a cartoon Seamus in a big yellow tractor.

While Monaghan’s had always been an Irish bar with its own pull of locals, the proud Kilkenny man’s takeover brought with it an array of new boosts - the musician proudly tells me of the weekly line-up of Irish acts: a live band and a DJ on the Friday, a double bill of live acts on a Saturday, followed again by a DJ, and on Sundays, depending on how happy everyone is with the results of the GAA, there’s another DJ on call ready to bring the customers into the small hours of Monday morning. 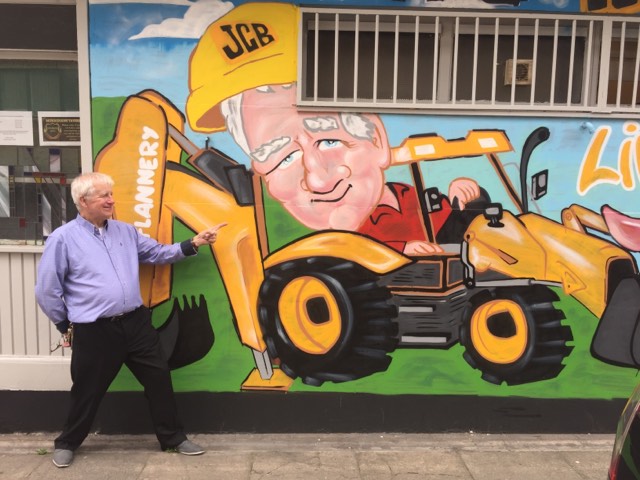 UNCANNY: The JCB man Seamus Moore admires a mural of himself (Photo by Patrick O'Mahony)

If that isn’t enough, the pub also boasts a 4am license, with evenings dedicated to Karaoke and Texas Hold ‘Em Poker, as well as a new menu with a broad range of cocktails. Dogs are welcome, and you can sometimes see a little French Bulldog sitting placidly by her owners’ feet as they enjoy a drink.

Monaghan’s is a country pub in the big city. The bar staff are welcoming, the regulars are friendly and chatty, and many of them speak fondly of their old days in Ireland. For the GAA on Sundays, there is always that Irish vibe of solidarity even as they skit each other on the scores and results. And of course, the entire pub rises for the national anthem.

Seamus, though mostly known for his music, is a veteran London publican and knows what it takes to keep the Irish diaspora happy. 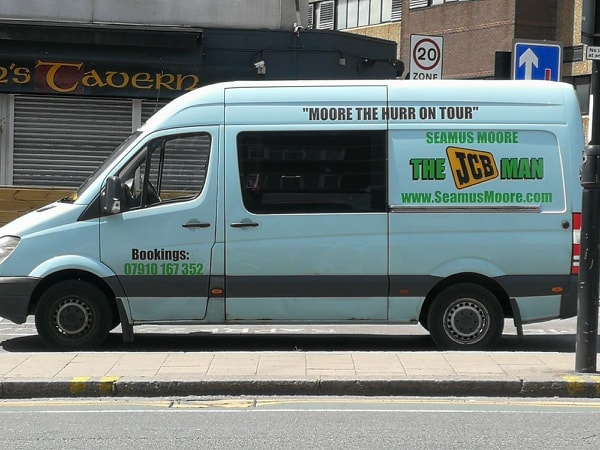 NOT QUITE A TRACTOR: Moore's JCB man van outside Monaghan's Tavern (Photo by Patrick O'Mahony)

“I’ve been running pubs in London since 1976” Seamus tells me as we sit outside Monaghan’s on the recently installed decking. “People will come to a pub because they feel welcomed, because it feels like home.”

He himself goes home often enough, he says, “to get away from the hustle and bustle of London,” but he is very much involved with the running of the pub. It would be easy to put his name on something and sit back, his job done, but he can usually be found serving behind the bar or sitting out on the deck with a cup of tea. As he puts it, “I think people like to see the boss man out front, [and to] know who’s running it”.

Being both a barkeep and a musician, it’s plain to see why Seamus’ songs are such big hits with people - they’re a perfect balance of singalong pub songs, with catchy, rowdy lyrics and easy hooks. It’s very easy to imagine the locals in the Tavern breaking into any one of them during a late Sunday session.

“It’s comedy,” Seamus adds. “It’s for the people who want to just get some drinks and have some fun.”
The late licence and the music, coupled with the very affordable prices - including £2.50 pints from 12-6pm every weekday - makes for a satisfied customer base and an excellent foundation for late-night parties, the sight and sound of which I enjoy regularly, as I live nearby.

Seamus has already brought a lot of changes to Monaghan’s and his plans are to keep going. The new decking, making an elevated smoking area on the High Street, was a welcome addition, just in time for the balmy summer months. But Seamus isn’t stopping there—he plans to expand the already strong musical atmosphere even further. As he tells me, “At the moment we have local bands playing, and we want to get bigger bands over from Ireland.” 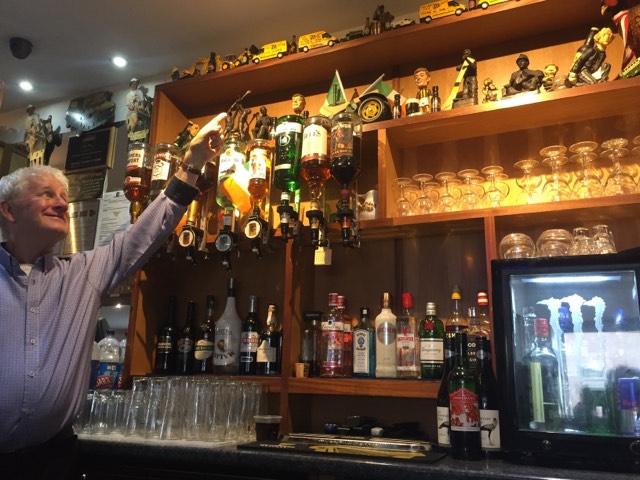 SHOW ME THE WHISKEY: Seamus points to the JCB memorabilia which sits behind the bar (Photo by Patrick O'Mahony)

Monaghan’s is the only Irish bar in the area, and walking in the doors and being greeted by Irish accents in county jerseys, eating Taytos and being served a truly excellent pint of Guinness, makes you feel like you’ve been transported home.

Wood Green has a lot of amenities already. Known to some as ‘The Golden Mile’ due to it’s array of shops and the mall on the high street, the Tavern is only a minute’s walk from the tube, which is situated on the Piccadilly Line and only three stops from Finsbury Park on the Victoria Line, meaning there’s an easy way home for anybody who wants to party until the sun comes up. 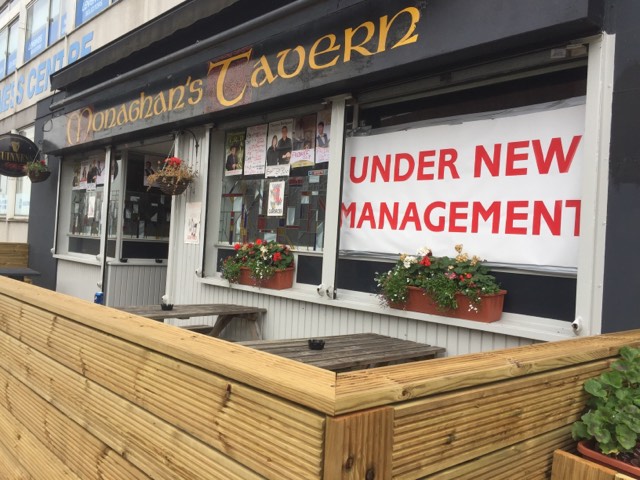 As he has for the past ten years, from July until August, Seamus will be touring the 32 counties of Ireland, including a show at the Ploughing Championships, playing hits such as Bang Bang Rosie, The Mighty Man From Mayo, and of course his namesake - the JCB song, before coming back full-time in October. But even during his tour you’ll still find him from time to time back at the bar, keeping an eye on things.

Monaghan’s Tavern is a great choice for either a wild weekend party or a relaxed Sunday drink to watch whatever matches are on that weekend. For the fans, Seamus’ array of CD’s and DVD’s are available to buy at the bar, and he is happy to stand in for photos.