UP TO 30 racist posters have sprung up overnight in Killarney, County Kerry, a town extremely popular with tourists and which is home to a diverse range of communities.

The adhesive posters depict a number of cartoon people under the words "YOU'LL NEVER BE THE IRISH".

Locals who discovered the posters this morning began posting the images on social media to voice their disgust.

The stickers appear to target those of Asian, Roma, African, Jewish and Islamic backgrounds, with stereotypical racial caricatures holding a sign for Killarney's 'Convention Centre', where thousands of people become Irish citizens each year. 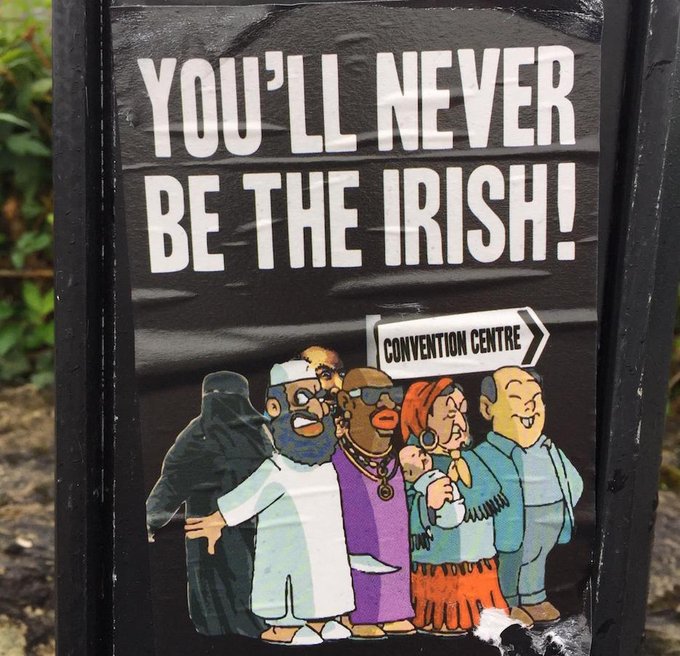 One of the racist posters which sprung up overnight in Killarney (Image: Reddit user bertie-4prez)

As pointed out by The Irish Examiner, the posters make no reference to Killarney's large Polish communities.

The Mayor of Kerry, Niall Kelleher, has condemned the racist posters, which have now been removed by the council. He confirmed that he had reported the matter to the gardaí and that he assisted with the removal of the posters.

"I'm disgusted and enraged by the appalling incident that occurred in the town of Killarney in the early hours of Tuesday morning,” the Mayor told The Examiner. The stickers "have no place and are not welcome in our town or in our communities," he added.

The Killarney Chamber of Tourism have also condemned the stickers "in the strongest possible terms", calling racism "an ugly weapon that must have no place in society,".

"The Chamber’s steadfast view is that there must be absolutely no tolerance for discrimination, prejudice, insult or antagonism directed at anybody because they are of a different race or ethnicity."

Remembering the 876 people who are long-term missing across Ireland