A US Catholic bishop has said that the President's support for legalized abortion disqualifies him from claiming the title of “devout Catholic”.

President Joe Biden was called out for taking a hypocritical stance on the controversial issue by the Chairman of the U.S. Conference of Catholic Bishops’ Committee on Pro-Life Activities.

Archbishop Joseph Naumann of Kansas City said that that the POTUS Joe Biden should "stop defining himself as a devout Catholic" and acknowledge that his views on abortion are irreconcilable with the church’s teaching –
namely that all life, even in its prenatal form, is sacred.

The religious leader said that President Biden’s openly expressed views should clarify that he is no "devout Catholic".

Broaching the issue with the Bishop, the Catholic World Report asked: "Mr. Biden professes to be a devout Catholic, yet is 100% pro-choice on abortion. How do you think America’s bishops ought to respond to this
situation?”

In response, Naumann said: “I can tell you how this bishop is responding.

"The president should stop defining himself as a devout Catholic, and acknowledge that his view on abortion is contrary to Catholic moral teaching.

"It would be a more honest approach from him to say he disagreed with his Church on this important issue and that he was acting contrary to Church teaching.

“When he says he is a devout Catholic, we bishops have the responsibility to correct him. Although people have given this president power and authority, he cannot define what it is to be a Catholic and what Catholic
moral teaching is.”

“What he is doing now is usurping the role of the bishops and confusing people,” Naumann added.

“He’s declaring that he’s Catholic, and is going to force people to support abortion through their tax dollars. The bishops need to correct him, as the president is acting contrary to the Catholic faith.” 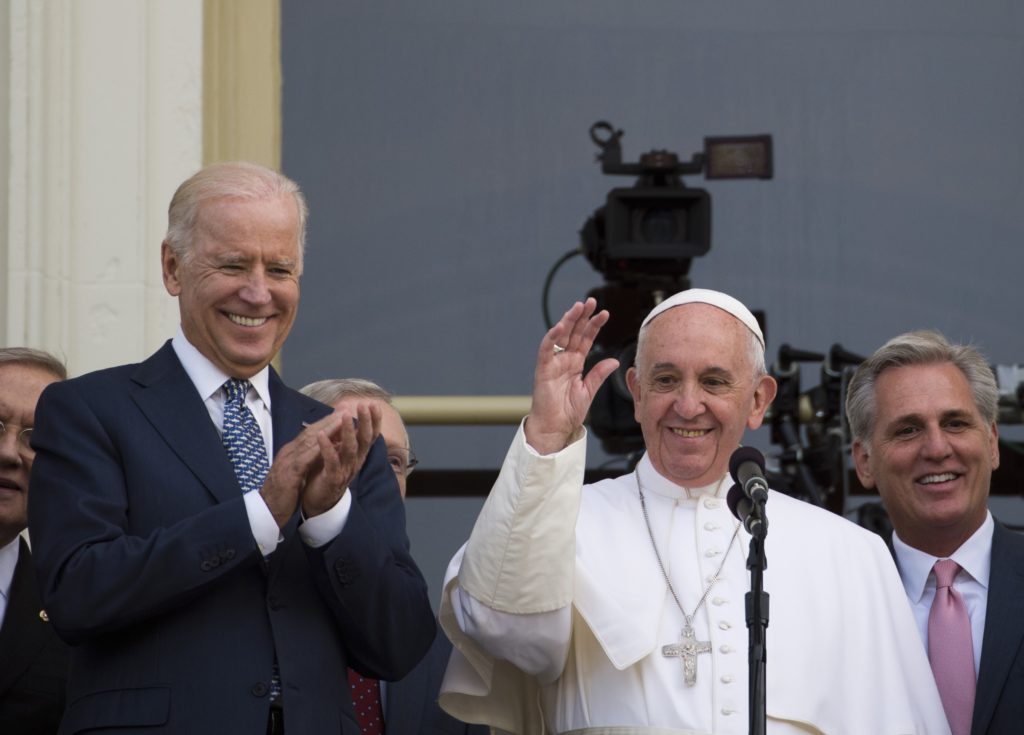 Joe Biden with Pope Francis at the US Capitol building in Washington, DC on September 24, 2015.

It is easy to see why some may find President Biden’s stance on the hot button issue confusing, as his views have evolved significantly over time.

In 1982, then-Senator Biden voted in favour of legislation that would allow states to overturn the landmark Roe v. Wade judgement – which ruled that abortion was a constitutional right.

Yet by 2007, Mr Biden had changed his tune and spoke favourably of Roe in an interview reported by Vox, describing it as “the only means by which, in this heterogeneous society of ours, we can reach some general
accommodation on what is a religiously charged and a publicly charged debate.”

So far beyond the pale are his views to some Catholics, however, that in 2019, a South Carolina priest, Fathey Robert E Morey, refused to serve him Holy Communion at Mass – citing the conflict between the former Vice
President’s stance on abortion and the Catholic Church's canon law as the reason.

“Sadly, this past Sunday, I had to refuse Holy Communion to former Vice President Joe Biden,” Morey said to SCNow.com at the time.

“Holy Communion signifies we are one with God, each other and the Church. Our actions should reflect that. Any public figure who advocates for abortion places himself or herself outside of Church teaching.”

When asked about the communion snub by the Catholic World Report, Bishop Naumann commended the South Carolina priest for “following his conscience.”

He said "When Catholics receive the Eucharist, they are acknowledging the Real Presence of Jesus, and also belief in the teachings of the Church.

“President Biden doesn’t believe in the Church’s teachings on the Sanctity of Human Life, and he should not put the priest in the situation where he has to decide whether or not to allow him to receive the Eucharist.

"He should know that after 78 years as a Catholic."