AN IRISH student has gone viral after playing an email scammer at his own game.

It all started when 22-year-old Limerick man Ross Walsh received one of those spam emails we all know and dread. Thinking quickly, he decided to have a little fun with a series of responses that incorporated Ireland’s favourite sporting pastime – hurling.

By the time it was done, he’d not only succeeded in getting his own back – he’d even managed to make a bit of money for himself.

The original scam email came from a “businessman” claiming to go by the name Solomon Gundi, who emailed Walsh with a once-in-a-lifetime chance to strike it rich.

The email began: "Hello friend, Pleased to be with you. “I know this email will come to a surprise to you but permit me to desire to go into business with you.

"My name is Solomon and I am big business leader looking to go into business with fellow enthusiastic businessman. I want you to invest £1,000 in my company for exchange for half business.

“You may wonder why I need £1,000 when I have £35,000? I want to teach young business people my knowledge which comes at a fair price. If you send me PayPal transfer of £1,000 we can begin immediately and become rich."

Spotting the scam a mile away, Walsh decided to play along.

“Delighted to receive your intriguing business proposal," he responded.

“As you know I’m a very enthusiastic businessman and think £1,000 is an insult. I have attached proof of payment of £50,000 to get the ball running. One thing you need to understand about doing business in Europe is we do things BIG. Please get back to me ASAP to discuss our next move."

Surprised at Walsh’s eagerness to get started, he pledged to make Walsh rich beyond his wildest dreams and set off to begin “trading” immediately.

But when Walsh’s £50,000 failed to materialise, Solomon got back in touch.

It was then that Walsh’s crafty scheme began to take shape.

He wrote: “You will be pleased to know I have had this problem many times before and it is an easy fix.

"Essentially what’s happening is my bank are after freezing this transaction as they fear this may be a scam which I know it isn’t as we are now business partners.

"This is the third time this happened to me and the bank quickly resolved the issue. In order to freeze the assets they need to see a small sum of money going from your account to mine to prove this isn’t a scam."

Walsh explained that £25 would be needed to 'clear' the transaction with his bank.

Walsh continued: "My banking manager also advised me to speak in code as we are making too much money to declare and the taxman could be spying on these emails. I’m confident you understand as you are a well established business man and no what’s up."

Suddenly, the word “money” was replaced by “high ball” while transaction became “short puck out”, “business” became “county” and “PayPal” became “the square”. 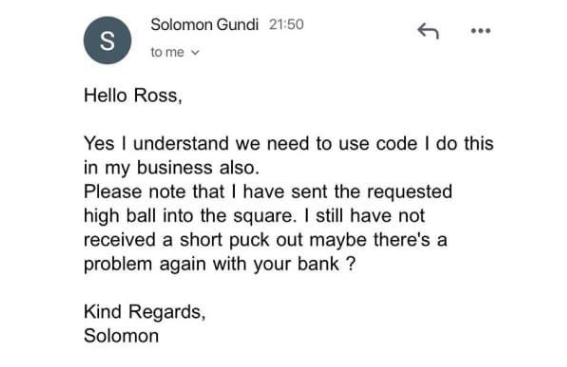 Solomon appeared to get the gist, replying: "Yes I understand we need to use code I do this in my business also.

"Please note that I have sent the requested high ball into the square. I still have not received a short puck out. Maybe there is problem again with your bank?"

Concluding his efforts, Walsh replied simply: "One thing you need to understand about a county final is never trust a short puck out." 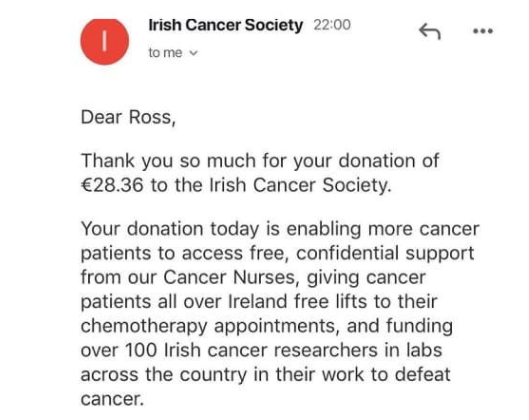 Walsh ended up putting the €28.36 he was sent to good use – by donating it to the Irish Cancer Society. Money well spent.