A LIVERPOOL SUPPORTER has decided to drive to Madrid for the Champions League instead of paying over the odds for flights.

Simon Wilson has bought a car for £40, instead of splashing out on plane tickets which would cost around £800, and will be uploading his journey to Youtube.

The Reds fan is no stranger to the spotlight and has previous in performing attention-grabbing stunts like this.

He previously snuck into the boxing match between Floyd Mayweather and Connor McGregor in 2017 and also into the BBC Sports Personality Awards. 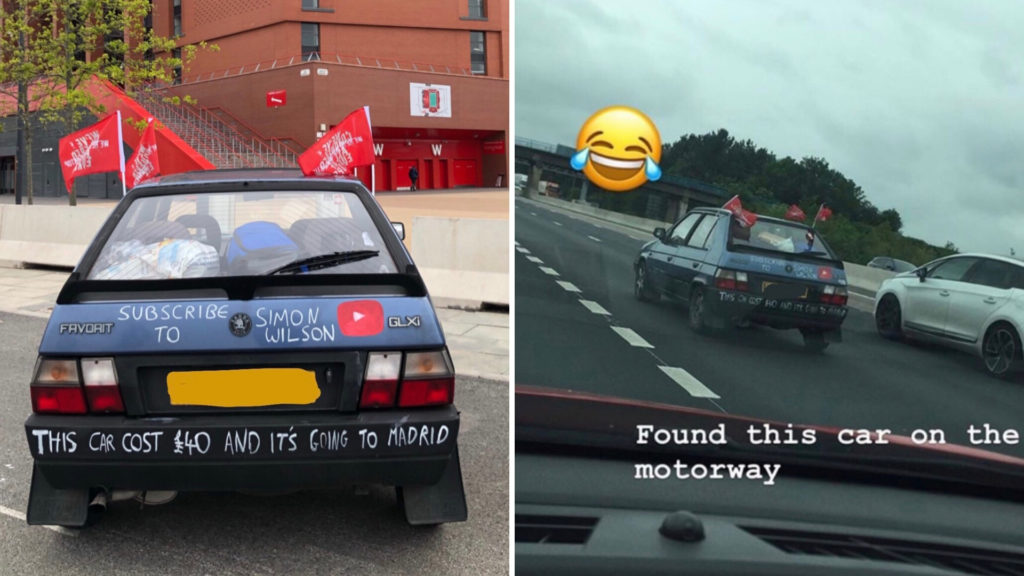 He insists that he isn’t simply after Youtube subscribers though, and that highlighting the astronomical prices being charged to football fans who are trying to follow their side.

“I’ll be uploading a couple of videos, but the reason I’m doing this is not just for Youtube,” he told the Liverpool Echo.

“I was lucky enough to get a ticket in the ballot through my season ticket, but because the ballot wasn’t announced until recently, I didn’t want to book transport.

“When I looked online, the transport was so expensive it was ridiculous, the flights were around £800.” He said.

Wilson acquired the car in question, a Skoda Favorit GLXI, through his brother, Ben, who spotted it online and realised it would be the ‘perfect’ vehicle for his trip.

“I rang up my brother, and asked him how much was the cheapest car we could get,” he explained.

“When he told me I was like ‘just buy it now, we will worry about it afterwards.’”

Simon isn’t going alone. With him in the car is his brother Ben, a fellow Liverpool fan, as well as, controversially, one his Tottenham-supporting subscribers. (I’m guessing the drive home is going to be awkward)

“I just thought, I’ve got a spare seat in the car and one of my subscribers, who I’ve travelled with before, is a massive Tottenham fan,” Simon said.

You can follow their journey through Simon’s Youtube channel as the battered car limps its way to Madrid for tomorrow’s final.

Liverpool face Tottenham Hotspur at 8pm in the Wanda Metropolitano in the first all-english Champions League final since 2008.