Maurice Robinson, 25, who is known as Mo, is due to appear at Chelmsford Magistrates' Court on Monday.

A lorry driver from Armagh has been charged with killing 39 migrants who were found dead in a trailer in Essex.

Maurice Robinson, 25, who is known as Mo, is due to appear at Chelmsford Magistrates' Court on Monday.

He was charged with 39 counts of manslaughter, conspiracy to traffic people, conspiracy to assist unlawful immigration and money laundering on Saturday.

Robinson was arrested shortly after the bodies of eight women and 31 men were found in the refrigerated trailer attached to his Scania cab in an industrial park in Grays in the early hours of Wednesday, October 23. 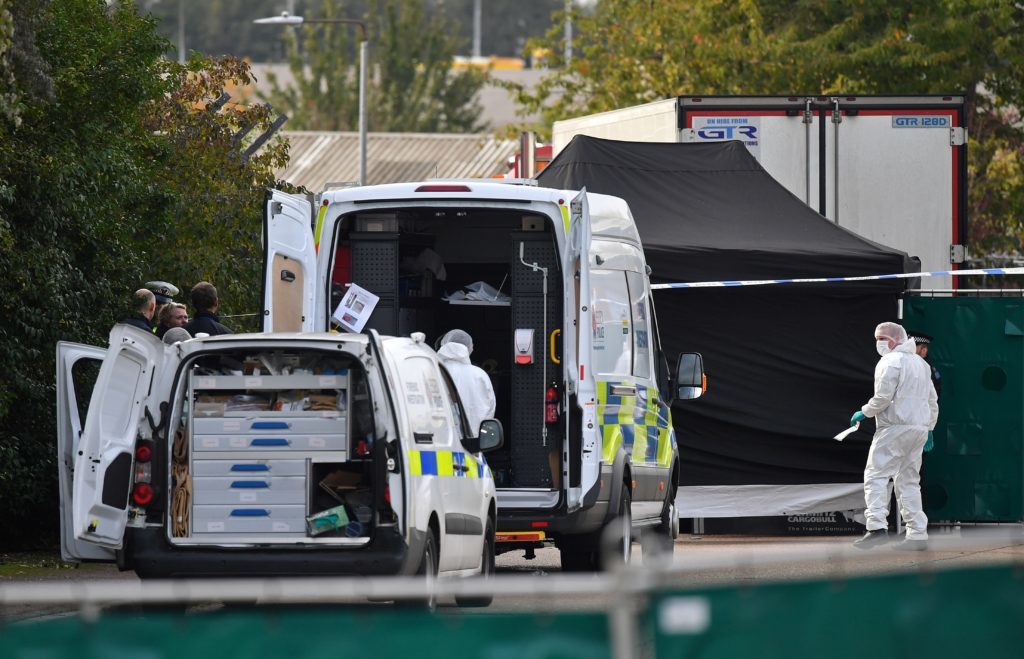 British Police officers in a forsensic suits are photographed at the scene with the lorry. Essex Police confirmed the 39 people in the back were all pronounced dead at the scene in an industrial park in Grays, east of London. (Photo by Ben STANSALL /AFP via Getty Images)

The charges came after a man wanted in connection with the investigation was arrested at Dublin port on Saturday. Gardai said the man, who is in his early 20s and from Northern Ireland, was held over an unrelated outstanding court order.

He is understood to be sought by Essex Police as part of their probe, and the force confirmed officers are in touch with Irish police.

Three other people arrested over the deaths remain in custody.

A 48-year-old man, from Northern Ireland, was detained at Stansted Airport on Friday on suspicion of conspiracy to traffic people and manslaughter. Officers had earlier arrested a couple named locally as haulage boss Thomas Maher and his wife Joanna, both 38, in Warrington, where they have a four-bedroom home.

The pair, originally from southern Ireland, were held on suspicion of 39 counts of manslaughter and people trafficking. In Belgium, police are hunting the driver who delivered the trailer to Zeebrugge, the port it left before arriving in the UK.

All of the victims have now been moved from the truck in Tilbury Docks to Broomfield Hospital in Chelmsford, for post-mortem examinations to be carried out.

Essex Police initially believed they were all Chinese nationals, but Vietnamese men and women are now feared to be among the dead. Vietnamese ambassador to the UK, Tran Ngoc An, spoke to Home Secretary Priti Patel on Friday night before meeting investigators from the National Crime Agency and Essex Police.

Detective Chief Inspector Martin Pasmore told reporters on Saturday the ambassador had visited the civic centre in Grays to pay tribute to the victims.

DCI Pasmore said the nationality of the victims is not yet known, but the focus is now on the Vietnamese community - although "there may be other nationalities involved".

He said there were "very, very few" identity documents recovered and that police will share fingerprints with Vietnamese authorities in a bid to identify the bodies.

Officers working on "the largest mass fatality victim identification process" in the force's history will also look at tattoos, scars and property, including jewellery and clothing.

Police said each of the victims appears to have some kind of bag, clothes and other belongings.

More than 500 exhibits have been collected, including mobile phones, which will be downloaded and interrogated for any messages that could give clues to the identity of the victims or how they came to be in the back of the trailer.

The BBC said it has been in contact with six Vietnamese families who fear their relatives are among the dead, with some having the smuggling fees repaid.

Relatives of 26-year-old Pham Tra My told the broadcaster they have not been able to contact her since she sent a text on Tuesday night saying she was suffocating.

"I am really, really sorry, Mum and Dad, my trip to a foreign land has failed," she wrote.

"I am dying, I can't breathe. I love you very much Mum and Dad. I am sorry, Mother."

Her family said they had paid £30,000 for her to be smuggled into Britain, which has now been repaid.

The woman's father, Pham Van Thin, told CNN: "The smugglers said that this was a ... safe route, that people would go by aeroplane, car... if I had known she would go by this route, I would not have let her go."

It is not yet known when the victims entered the trailer, where temperatures can be as low as minus 25C if the fridge is activated, or the exact route it travelled.

Belgian officials said the trailer arrived at Zeebrugge at 2.49pm on Tuesday and left the port the same day en route to Purfleet. The trailer arrived at Purfleet at around 12.30am on Wednesday, and was picked up by the cab, known as the tractor, which arrived from Northern Ireland via Holyhead in North Wales on Sunday.

The lorry left the port at Purfleet shortly after 1.05am before police were called to the Waterglade Industrial Park on Eastern Avenue in Grays at 1.40am.