A MEMBER of An Garda Síochána who was seriously ill with coronavirus has returned home from hospital.

Sgt Paul Cullen, from Balbriggan in Dublin, was released from Beaumont Hospital on Wednesday after previously being so ill his medical team had discussed putting him in an induced coma.

Speaking to RTÉ News at One today, 48-year-old Sgt Cullen said he feels very lucky to be home but is "mindful" of the health care workers "who are getting the brunt of it".

The father-of-three was taken to hospital via ambulance after what he initially thought was a chest infection "got worse and worse" despite being on antibiotics to the stage where "I couldn't even have a conversation".

He was brought to Beaumont Hospital and tested for the virus, which came back positive after about 24 hours, which shocked the Garda.

"I quickly found out the virus does not discriminate," he said. "I was young, fit and healthy with no risk factors."

While he did not require a ventilator, Sgt Cullen was taken to ICU after an X-Ray of his lungs showed serious infection in both, and was treated with Continuous Positive Airway Pressure (CPAP) while in critical care. 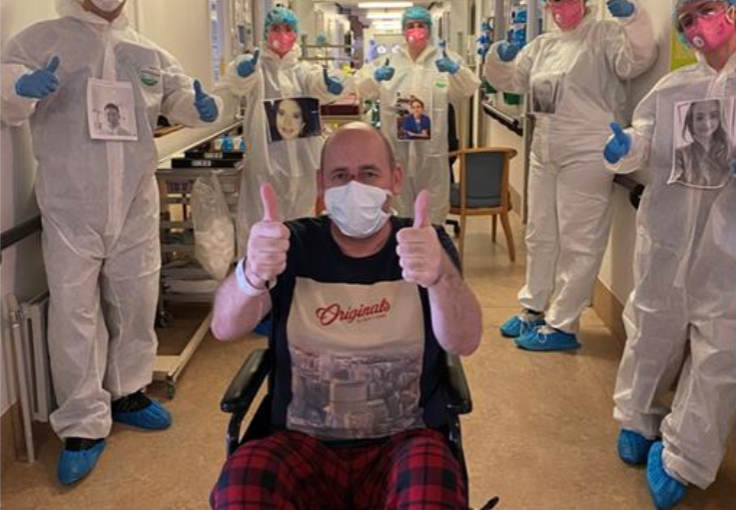 "I lost a lot of sensations, not just my breathing, but I couldn't think correctly," Sgt Cullen said, thinking back to when he was at his sickest.

"I felt like my lungs were getting harder, and the only thing to make me feel better was to cough up something that wasn't there. The sensation was overwhelmingly hard because of the breathing, congestion and constant coughing," he said.

However, he did not need to be placed in an induced coma which he had previously been told would be a "highly likely" course of treatment, according to RTÉ News.

In a rare and much-needed revelation of good news, Paul Cullen found out via text that he had been promoted to the rank of Sergeant while he was in hospital battling the disease, and admitted it "was a nice morale boost to get".

His discharge from Beaumont Hospital on Wednesday after 14 days drew comments of support from well-wishers on social media after the hospital shared his story alongside a photograph of him being released.

Now home with his family, Sgt Cullen said he is still short of breath and suffering from fatigue but "is making a good recovery".

"I can't stress enough the amazing work that the staff do and I am so grateful," Sgt Cullen said of the Beaumont Hospital staff.

"The staff are taking incredible risks themselves but what was very clear is that the patient came first."