THE MAJORITY of people in Northern Ireland and the Republic fear a return to violence in the north is entirely possible.

A new BBC show which aired last night looked at Northern Ireland's past, present and future as communities prepare to celebrate 100 years since its creation after the Republic won its independence from Britain.

The status of the North has come under the spotlight in recent years after the British public voted to leave the EU, an act which threatened a return to a hard border on the island of Ireland-- this was avoided due to the Northern Ireland Protocol.

Since the Protocol came into effect, those working at customs have been threatened with murals and with physical violence, week-long riots have erupted on the street, and clashes between communities were captured on film in Belfast, drawing frightening parallels with the Troubles seen before the Good Friday Agreement brought about a tentative peace. 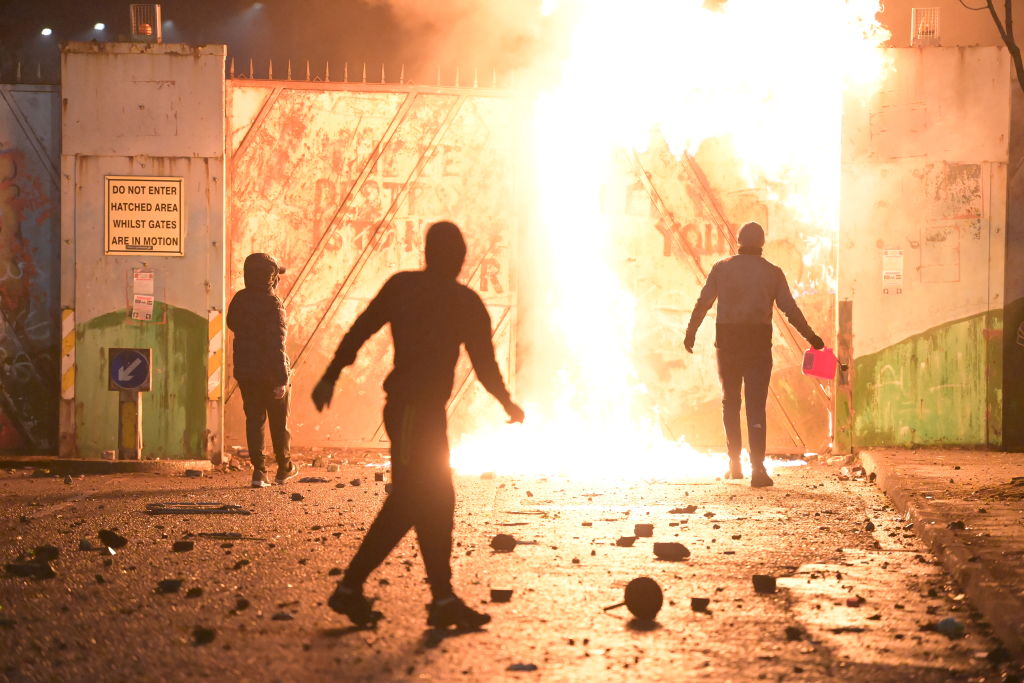 BELFAST, NORTHERN IRELAND - APRIL 07: Fire fed by petrol burns as youths clashed at the Peace Gate at the Springfield Road/Lanark Way interface on April 7, 2021 in Belfast, Northern Ireland. Violence broke out after a Loyalist protest, with youths attacking police officers and petrol-bombing a bus. (Photo by Charles McQuillan/Getty Images)

Speaking to the BBC Spotlight: A Contested Centenary last night, Boris Johnson promised to "sandpaper" the Protocol to get rid off the "ludicrous barriers" to internal UK trade, saying the checks were supposed to be "light touch", but said he would not scrap it altogether.

In a cross-border poll commissioned by the BBC programme, carried out by LucidTalk and Ireland Thinks earlier this month, pollsters asked the question: 'Could violence return to Northern Ireland?'

In Northern Ireland, 76% agreed that violence could return, 11% disagreed and 13% were unsure.

In the Republic, 87% believed violence could return to Northern Ireland, while just 4% disagreed and 9% were unsure.

The survey also queried people on their thoughts about Northern Ireland's place in the UK and whether it should leave now, in 10 years or in 25 years-- you can read more here.

Spotlight: A Contested Centenary is available to watch now on the BBC iPlayer by following this link.