Over 300 plants were discovered growing in the Monaghan home, with an estimated street value of 250,000. The man has been arrested and detained for questioning in connection with the discovery. (Image: An Garda Síochána)

A MAN has been arrested after Gardaí seized cannabis plants thought to be worth over €250,000 following a search of a house in Carrickmacross, Co. Monaghan, on Saturday.

Arriving at the property shortly after 11.30pm, gardaí discovered a cultivation unit with over 300 cannabis plants – with an estimated street value of over €250,000.

A man in his 30s has been arrested in connection with the discovery and is being detained at Carrickmacross Garda Station under Section 2 of the Criminal Justice (Drug Trafficking) Act, 1996.

The investigation is active and ongoing, a garda spokesperson confirmed. 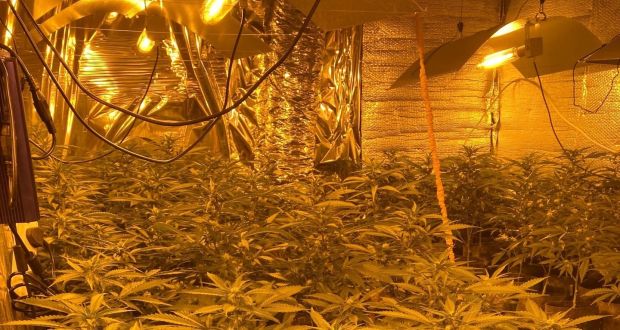 Over 300 plants were discovered growing in the Monaghan home, with an estimated street value of 250,000. The man has been arrested and detained for questioning in connection with the discovery. (Image: An Garda Síochána)

In 2016, two men were found with a similar quantity of cannabis (worth €250,000) and were sentenced to two years and sixteen months, respectively.

The sentences were relatively lenient given that under current laws, anyone found to be in possession of over €13k worth of drugs is, if convicted, liable to face a minimum term of 10 years in prison.

Stricter punishments are meted out to serious drug offenders under Section 15A of the Misuse of Drugs Act.

However,an investigation by The Journal found that in 2018, only one person was given a sentence exceeding the ten year minimum that is stipulated in the guidelines.