FORMER US President George Bush Senior has passed away at the age of 94.

President George Herbert Walker Bush, who had been in failing health, died at 10.10pm local time on Friday.

The passing of the 41st President of the United States comes just seven months after the death of his wife, Barbara.

In a statement on behalf of the family, George Bush Junior paid tribute to their ‘dear dad’.

“Jeb, Neil, Marvin, Doro and I are saddened to announced that after 94 remarkable years, our dear dad has died,” said the statement.

“George HW Bush was a man of the highest character and the best dad a son or daughter could ask for.

“The entire Bush family is deeply grateful for 41’s life and love, for the compassion of those who have cared and prayed for dad, and for the condolences of our friends and fellow citizens.”

Bush was elected President in 1989 after two terms as Vice-President to predecessor Ronald Reagan.

Much of his single term was dominated by foreign affairs, primarily the Gulf War, which ended with Saddam Hussein withdrawing his forces from Kuwait.

He also signed the START arms treaty with Mikhail Gorbachev as the Cold War came to an end amid a thawing in relations with the Soviet Union.

He was succeeded by Bill Clinton in 1993. 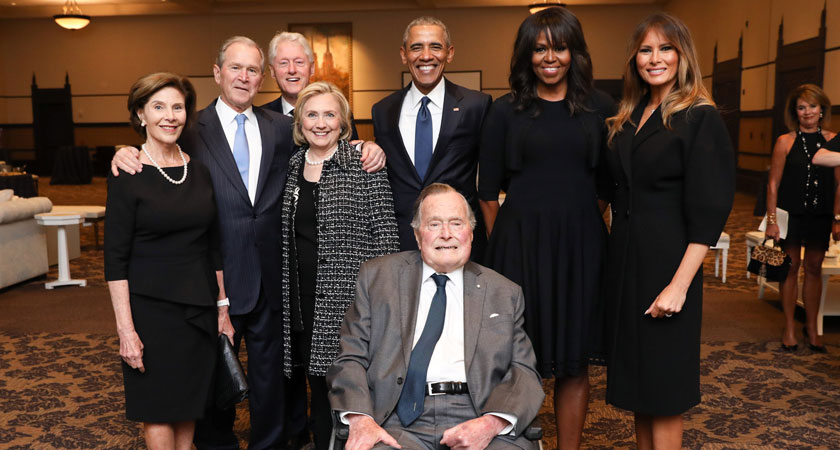 President Bush at the funeral of his wife Barbara in April this year (Image: Getty)

President Bush served as a naval aviator during World War Two before entering the oil business.

He unsuccessfully ran for the US Senate in 1964 before being elected to the House of Representatives two years later.

During his political career he also served as director of the CIA.

Paying tribute, current President Donald Trump said: “His example lives on, and will continue to stir future Americans to pursue a greater cause.”

President Barack Obama described Bush as ‘a patriot and humble servant’, adding: “What a testament to the qualities that make this country great. Service to others. Commitment to leaving behind something better. Sacrifice in the name of lifting this country closer to its founding ideals.”

Who is Ronan Tynan? 11 things you need to know about the Irish Tenor