'A man of peace, a courageous and fearless leader' - Bloody Sunday priest Bishop Edward Daly is laid to rest in Derry

COURAGEOUS Bloody Sunday priest Bishop Edward Daly was a man of heroic generosity, mourners were told at his funeral in Derry this afternoon.

Speaking to the congregation at St Eugene's Cathedral, Chief Celebrant Bishop Donal McKeown paid a personal tribute to the man who had fought for peace through some of the darkest days in Northern Ireland.

Bishop Daly, who died on Monday aged 82, became an symbol for peace during the Troubles when he was photographed on Bloody Sunday waving a white blood-stained handkerchief as he lead a group of people carrying the dead body of 17-year-old Jackie Duddy to safety.

"He showed physical courage on Bloody Sunday and his moral courage was evident in his passionate struggle against violence and injustice from all quarters," Bishop McKeown said.

"It takes enormous courage to be a peacemaker and he was an apostle of mercy, whether as a curate, as a bishop or as chaplain in the Foyle Hospice. 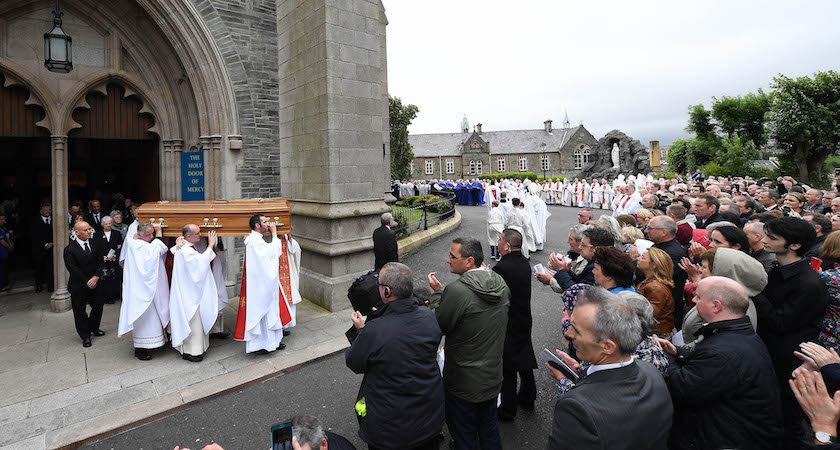 Recalling the first time they met in 1974 in Rome, Bishop McKeown added: "He asked us to do one thing – he said ‘please pray for me’.

"This was not merely a pious expression. Rather they seemed to come from a heart which knew the maelstrom that was Northern Ireland in those awful years.

"He knew about murder and loss. He knew that the years of conflict followed upon decades of terrible poverty and discrimination – as well as heroic generosity.

"He knew the enormous resilience of people who could face almost anything together," current Bishop of Derry Bishop McKeown said. 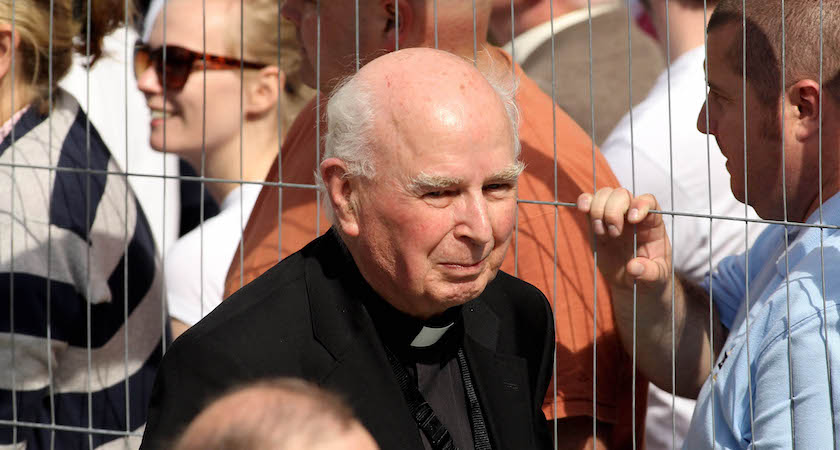 Over the past week more than 10,000 people visited St Eugene's Cathedral to pay their respects to Bishop Daly, who has served as a priest for the last 59 years.

President of Ireland Michael D Higgins was among the dignitaries who attended his Funeral Mass today, at which a message from Pope Francis was also read out. 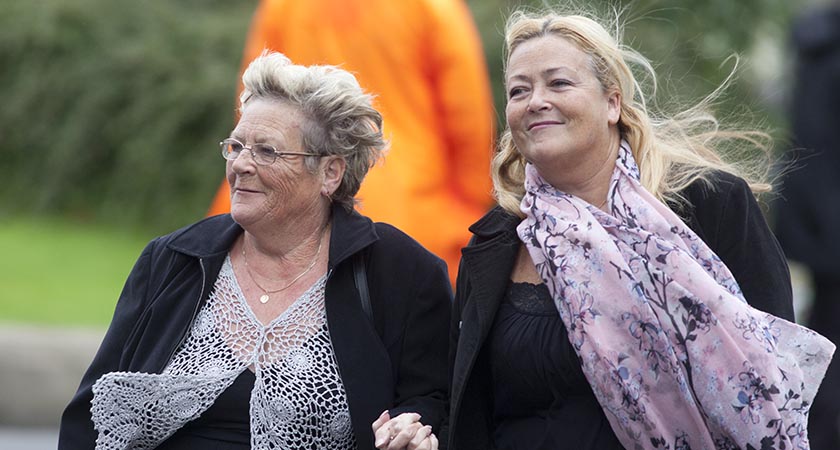 He was forced into retirement in 1994 after suffering a stroke but he continued to serve as chaplain in Derry's Foyle Hospice until this February.

Mourners, including Bishop Daly's sisters Anne Gibson and Marion Ferguson as well as his nieces and nephews, gathered today to hear about a man who had wished for peace in his native country. 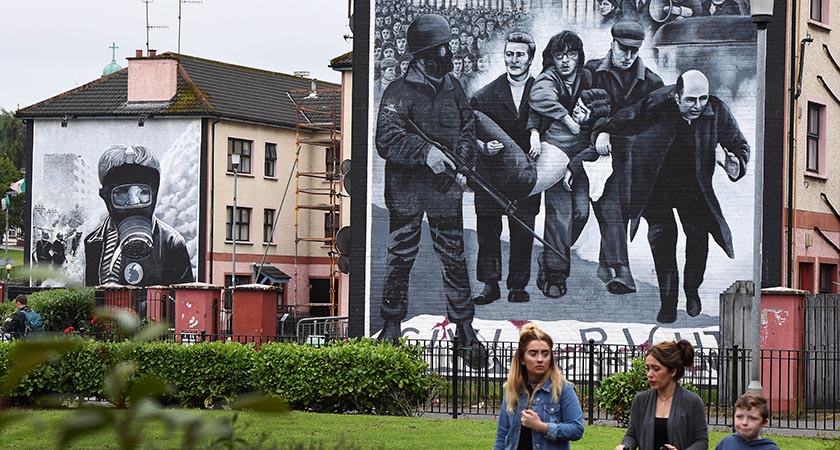 Tributes were paid to Bishop Daly for his work throughout the Troubles.

"It took enormous courage to build healing on the burning sands of war," Bishop McKeown said.

"We are all blessed because we have seen how love can transform a blood-stained piece of cloth into an unforgettable symbol of divine compassion.

"Today we are grateful for Edward Daly and thousands of others across our community and churches who took risks and paid the price that peace might take roots in our hearts and communities.

"Edward Kevin Daly, your time of faithful service is over. You have fought the good fight, you have run the race, you have kept the faith," he added. 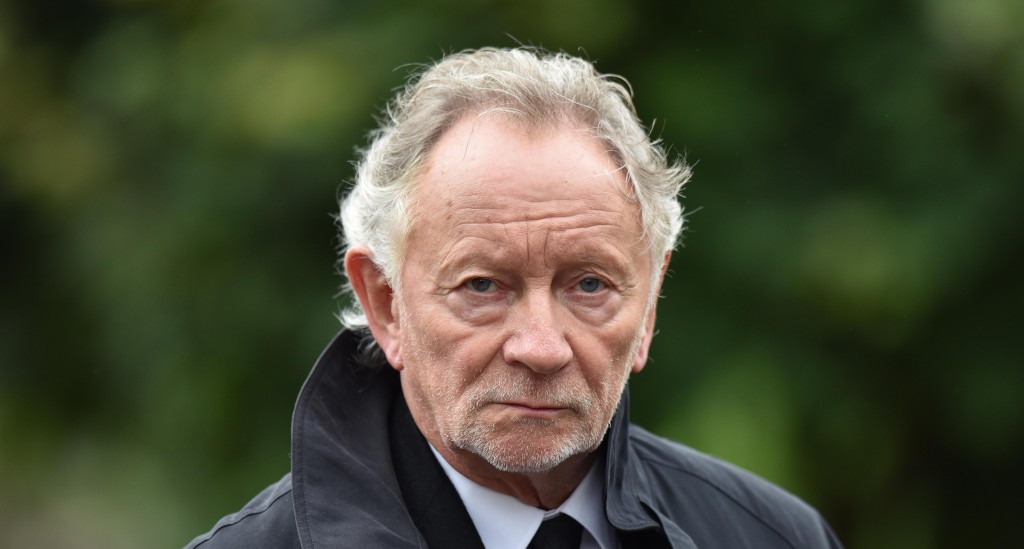 Archbishop of Armagh Eamon Martin described the immense contribution Bishop Daly had made to the city of Derry.

"Over the past few days tens of thousands of people have visited this Cathedral out of great respect for Bishop Edward Daly. Many tributes have been paid to him," he said.

"Countless words have been written, reflecting on his immense contribution to the life of Derry city and diocese and to peace and justice in Ireland.

"Above all, the people who knew and loved Bishop Daly have been able to share stories of him and tell their children and grandchildren about the caring ministry of a great priest and bishop."

Archbishop Martin also paid a personal tribute to the man who ordained him as a priest 29 years ago.

He said: "There was never any doubt that Edward Daly was a great priest, a caring and compassionate pastor, a man of prayer and peace, a courageous and fearless leader, a special person." 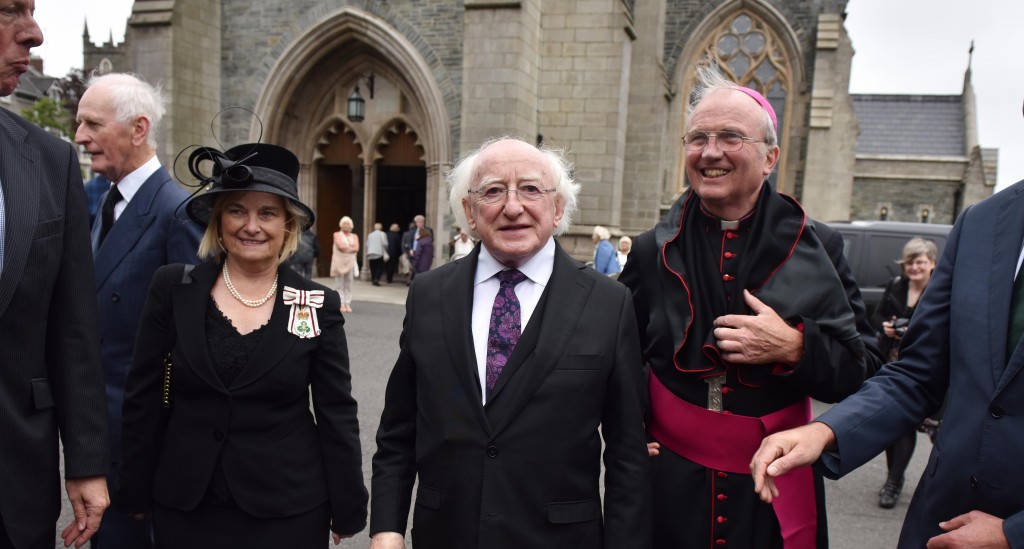 Pope Francis, in his message of condolence, paid tribute to Bishop Daly's generosity.

"The Holy Father was saddened to learn of the death of the Most Reverend Edward Kevin Daly, Bishop Emeritus of Derry, and he sends heartfelt condolences to his family and to the clergy, religious and lay faithful of the Diocese.

"Recalling Bishop Daly’s generous and dedicated episcopal ministry in the service of peace and justice, His Holiness joins you in prayerful thanksgiving for his life and in commending his soul to the merciful love of God Our Father.

"To all who mourn the late Bishop’s passing, Pope Francis cordially imparts his Apostolic Blessing as a pledge of hope and consolation in our Lord Jesus Christ."

Following his Funeral Mass Bishop Edward Daly was buried on the grounds of St Eugene's Cathedral next to his predecessor, Bishop Neil Farren who was Bishop of Derry from 1939 tol 1973.

Bishop Daly was ordained a priest for the Diocese of Derry in 1957. His first appointment was as a curate in Castlederg, Co Tyrone after which he was appointed curate in the parish of Saint Eugene’s Cathedral, which includes the Bogside area of Derry City.

He also made headlines by calling for an end to clerical celibacy in his book about his life in the Church called A Troubled See: Memoirs of a Derry Bishop.