FORMER PRESIDENT of Ireland Mary Robinson made an inspirational speech last night at an event  as part of a collaboration between the London Irish lawyer's Association (LILA) and the University of Liverpool, London.

Speaking on the subject of 'Women's Leadership and Climate Change', the event drew people-- mostly lawyers, mostly women-- eager to hear what the first female president and current climate champion had to say.

Many of the women present would have been children during Mrs Robinson's presidency, and the impact she had had on these young women was clear, both by the rapt attention given during her speech and the fact that one woman admitted she would only have been more excited to see Beyoncé.

Mrs Robinson spoke on the power of language, and said that she now rarely uses the phrase 'climate change', preferring instead the terms climate justice, climate crisis or climate emergency, because the words 'climate change' don't properly convey the scale of what we are facing. 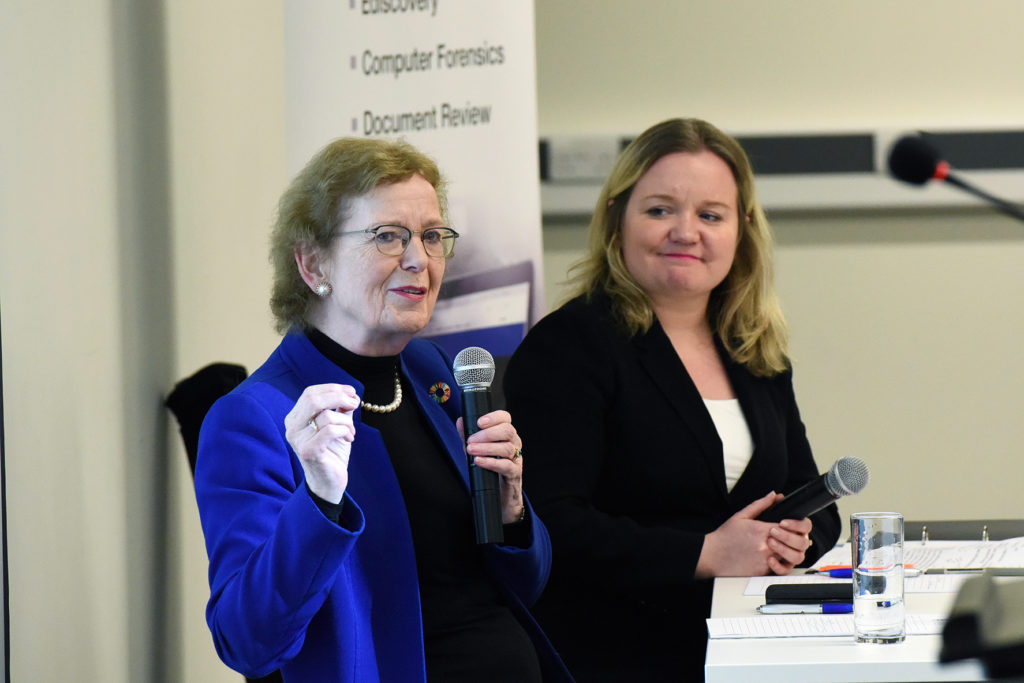 She says she has a "compulsion" to speak on the issue, because, in her words:

"[The situation of] Climate change is worse than we think.

"It's worse than we know. Worse than we could imagine. And it's getting worse more quickly.

"But the good news is, we're learning that we can do a great deal and get on track."

Making reference to the new global youth movement, and the millions of children who are fighting for climate justice, Mrs Robinson said:

"What the children who have marched for the Fridays for Future have been telling us is that they now know we are not doing what we should be doing.

"They are saying 'We want you to provide us with a proper future.'"

Mrs Robinson called 16-year-old Greta Thunberg's now-famous use of the phrase 'How dare you?' during her impassioned speech at the United Nations Climate Action Summit a "really interesting way of challenging the representatives of government" that they were not doing enough to secure her future.

The former president gave an inside view into the "messy negotiations" which eventually led to the 2015 Paris Agreement, and said that while the "final package was a really good one", the Treaty was weakened at first due to the voluntary nature of the agreement.

It was, Mrs Robinson claims, small island states who had been directly affected by climate change, and the indigenous peoples within those states, who successfully put the pressure on powerful countries to agree on how to move forward. 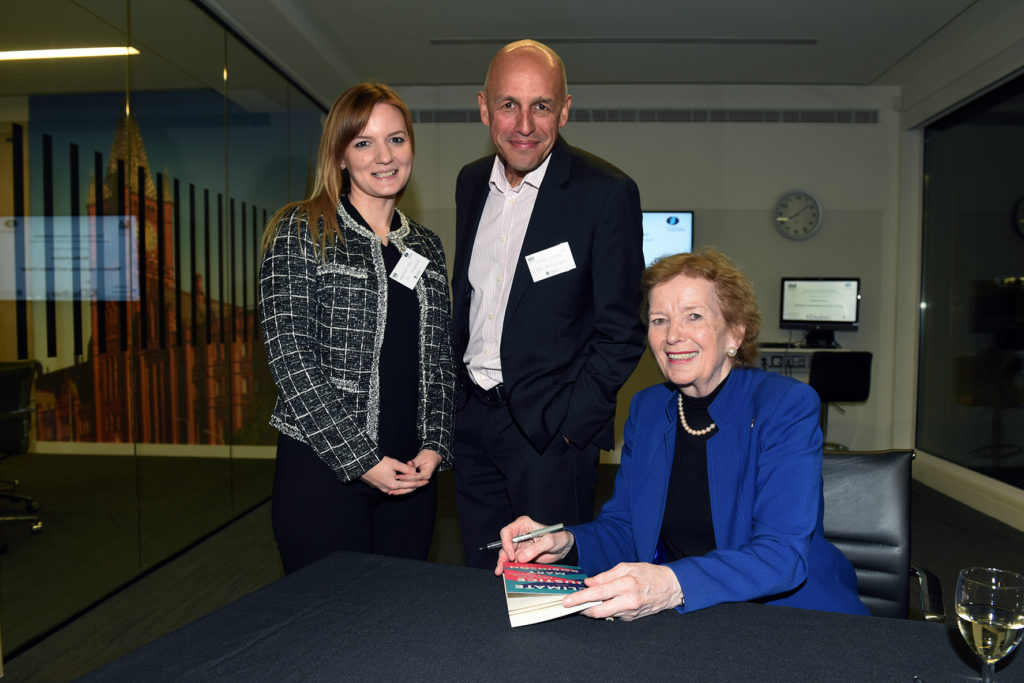 Mary Robinson signing a copy of her book for Adrienn Toth and Steve Young from KLDiscovery who sponsored the evening. (Photo: Malcolm McNally)

But now, with Ireland's greenhouse gas emissions exceeding EU targets for the third year in a row; with China's emissions growing, India's emissions growing and the United States having pulled out of the agreement, Mrs Robinson says the pressure to protect the environment could have lost its political fire, if not for the loud movements of Fridays for Future and Extinction Rebellion.

While she supports Extinction Rebellion's cause and supports disruption, Mrs Robinson warned activists that they needed to be "very careful to have the right tactics," and that they need to "keep people with them."

"There are other ways of disruption," Mrs Robinson said, naming litigation and 'stranded assets' as possible options, referencing the once-popular Asbestos as an example. 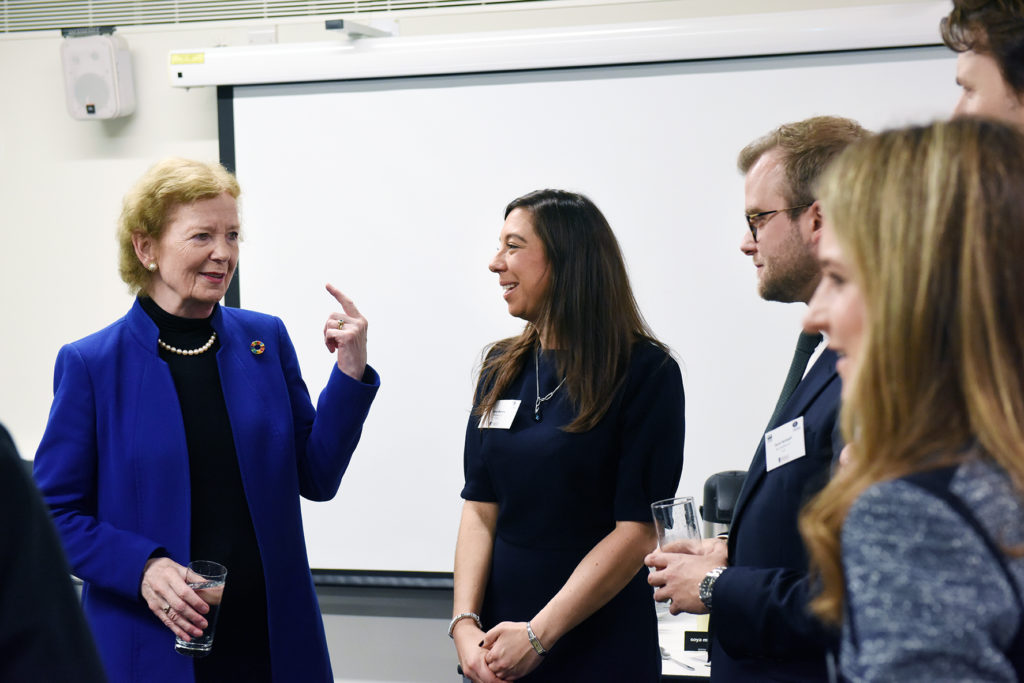 Mrs Robinson set out her three steps to tackle the climate crisis.

3. Imagine The World We Are Hurrying Towards.

"Do something you weren't doing before." Mrs Robinson says, who herself has become pescatarian.

"Get angry with those who have more responsibility than you do. You're using carbon but you've done something about it on your own initiative, now get angry at those who should be doing far more. Governments, cities, universities, businesses-- especially the fossil food industries, agriculture and transport industries."

"What kind of world will it be? It will be a much healthier world. We won't have the choking pollution of fossil fuels.

"It will be a more equal world," she says, drawing on an example of two female Irish architects who have "chosen the Earth as their client".

"And I saw the future," Mrs Robinson said. "I saw a circular economy. I saw, not individual electrical vehicles but electric mobility. I saw ways of living together.

"It was a wonderful sense of the world we need to be talking about more."

"We are the first generation to fully understand how serious the problem is.

And we are the last generation that can do something about it." 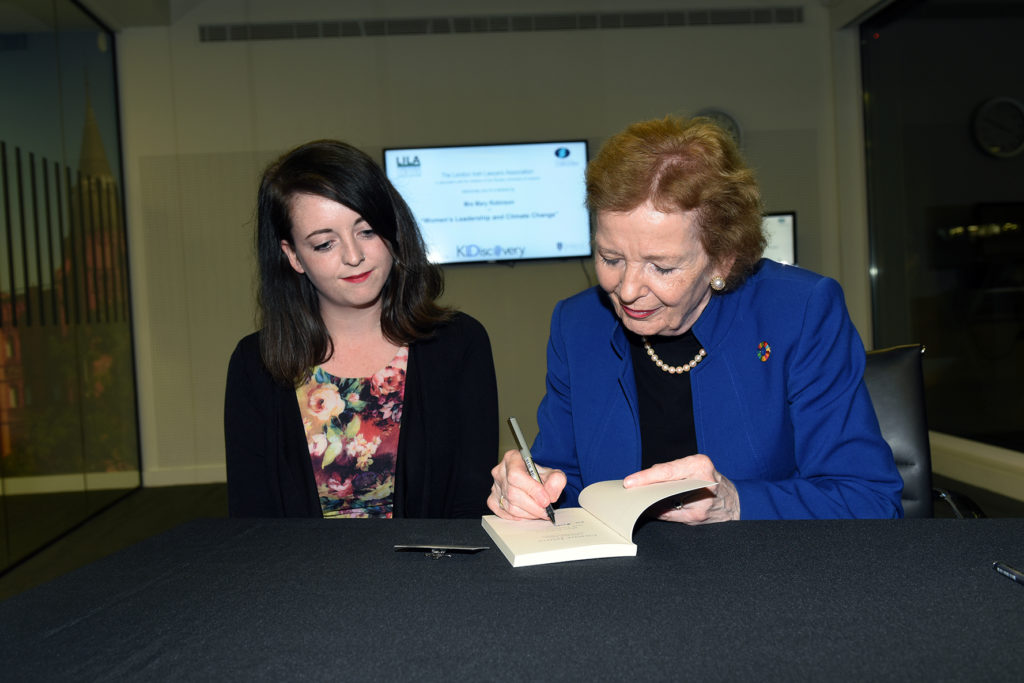 Mrs Robinson's book on tackling the climate crisis, 'Climate Justice: A Man-Made Problem with a Feminist Solution', is out now.