Ireland must face the familiar ordeal of a two- legged play off if they are to qualify after being held by Denmark at the Aviva this evening.

In a game a of few chances, Conor Hourihane had the best opportunity for the hosts in the first half but lashed his right-footed straight at Kasper Schmeichel.

The hosts came into it more after the break but Martin Baithwaite’s goal in the 74th minute was their first shot on target.

A passionate Aviva crowd increased the volume and were rewarded when Doherty stole away at the back post to head home from Enda Stevens' cross to restore parity in the 85th minute. 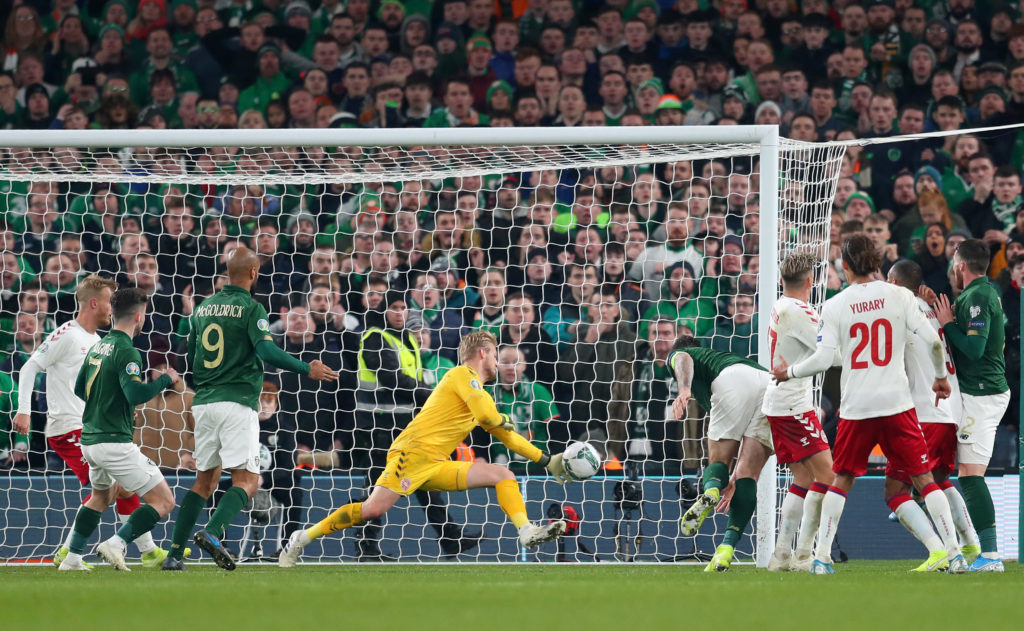 Matt Doherty  stoops to head past Kasper Schmeichel during the UEFA Euro 2020 qualifier between Ireland and Denmark at the Aviva this evening. (Photo by Catherine Ivill/Getty Images)

Ireland showed attacking intent that was sadly lacking in the earlier stages of the contest but could not force a winner.

Mick McCarthy’s men went into this game knowing at least a play-off place was in the bag before a ball was kicked this evening after results at the weekend.

Denmark played like they were content with the draw from the outset and Christian Eriksen was largely anonymous, save for one blocked shot that Shane Duffy did well to block in the opening period.

A lack of goals has dogged Ireland throughout this qualification phase and a set piece looked the most likely way to break the deadlock. 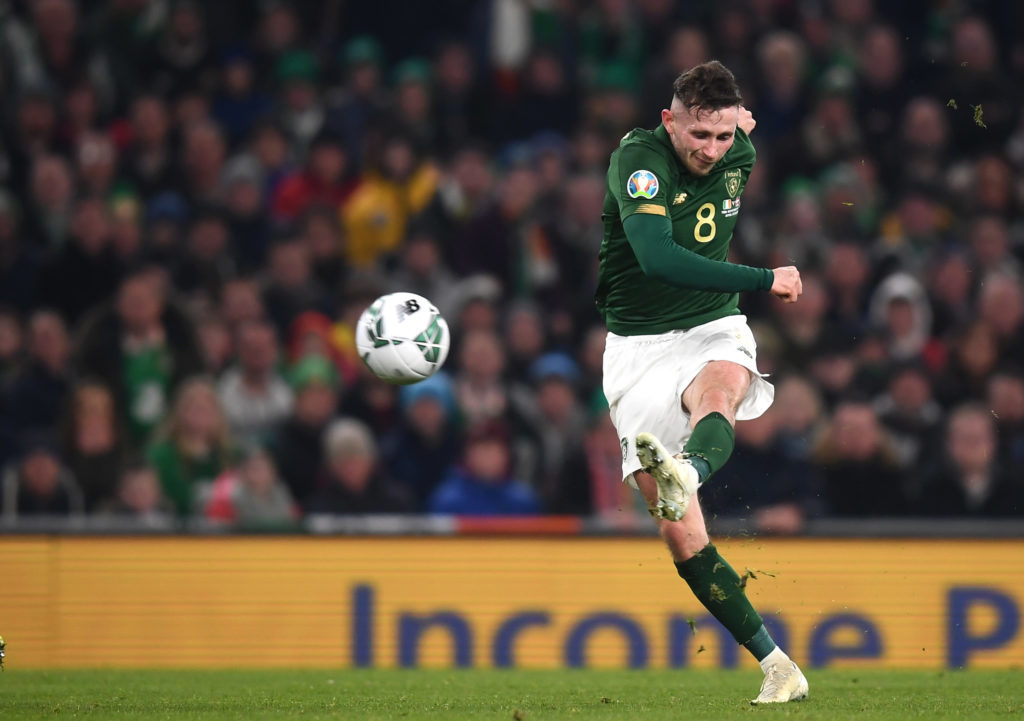 Alan Browne has a shot on goal during the UEFA EURO2020 qualifier match between Ireland and Denmark at the Aviva Stadium in Dublin. (Photo By Stephen McCarthy/Sportsfile via Getty Images)

In one of the rare opportunities from open play, David McGoldrick turned provider for Alan Browne, but the Preston man flashed his volley just wide.

It was McGoldrick’s hold up play that put Hourihane through but the midfielder stabbed his shot at straight at the grateful Schmeichel.

Newcastle centre half Ciaran Clark came on from John Egan at half time and looked a threat from set pieces but a draw looked the most likely outcome until Braithwaite’s clinical finish forced the issue.

Ireland stepped it up after Doherty raised the roof but couldn’t finish the job and will now face Bosnia and Herzegovina, Slovakia or Wales away next March in the play-off semi final.

"It's disappointing, I thought we were the better team and one slip has cost us,” captain Shane Duffy told Sky Sports after the match.

"We believed we could beat them, it was difficult when they went 1-0 up but we kept going and we have to pick ourselves up for some big games in March. There is no blame in this team, we win and lose together. We pick ourselves up and we go again.”

He added: "They didn't create that many clear-cut chances, we had a few, I had the feeling this was our game, this was our moment.

"We gave everything, but the win wasn't there. It's a hard one to take right now. We have scored a few late goals in this campaign but it wasn't to be. We have to dust ourselves down and do everything we can do in March."

Your @ThreeIreland Man of the Match...