CHRISTIAN ERISKEN has been pictured for the very first time since leaving hospital after suffering a cardiac arrest during Denmark's opening fixture at Euro 2020 last month.

The Inter Milan midfielder collapsed suddenly during the first half of his nation's eventual 1-0 defeat to Finland and required emergency treatment as his horrified teammates looked on.

The Danish players memorably formed a protective ring around Eriksen, providing him privacy away from the television cameras, as he fought for his life.

Thankfully, the 29-year-old regained consciousness and was taken to hospital, where he remained for the next few days.

After having a cardioverter defibrillator implanted into his chest, Erisken left hospital on June 18, and has been recovering at home ever since.

He was spotted out and about for the first time on Friday after a young fan bumped into him on a beach in northern Denmark and asked for a photo. 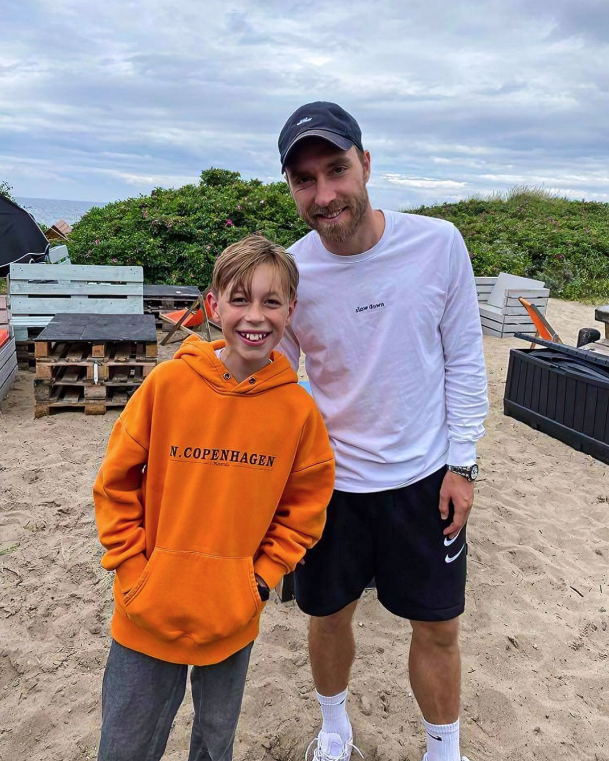 Bjorn Bindzus, who posted the selfie with Eriksen on Instagram, told Danish newspaper BT: "I was nervous and completely speechless when I had to ask about the picture. But I'm proud that I did it and I'm very happy today.

"We were at a photoshoot for a commercial when I suddenly saw him while we were having lunch. So I waited to ask him until he had finished talking to his girlfriend. And he said yes right away.

"I didn't see the incident against Finland, but he looked healthy. It was really nice to see.

"I mostly watch football when the national team is playing, and here my favourite player is without a doubt Christian Eriksen. I'm proud of myself that I have that image."

Despite losing their star player, as well as their opening two matches at the tournament, Denmark find themselves just two wins away from glory after advancing to the semi-final on Saturday.

Emphatic victories against Russia, Wales and Czech Republic have set up a mouthwatering tie with England on Wednesday night for a place in Sunday's final.