A CO. MAYO priest is on a mission to change his parish’s health with Operation Transformation, one “weigh in and pray in” at a time.

Father John Kenny, who earned the nickname Father Trendy last year for a string of selfies with cars and models, is the parish priest in the village of Tourmakeady in Mayo.

Along with his parishioners, he is on a mission to lose weight, get fit and eat healthy.

“We wanted everybody to be able to take part here, sporty or not sporty, young or old, just something that anyone could get involved in,” he told The Irish Post.

Their fitness and diet programme is based on the RTÉ show, Operation Transformation.

Presenter Kathryn Thomas leads a group of 12 leaders on their weight loss mission each week throughout January on the show every year.

As the programme’s popularity rose, community groups across Ireland have taken the opportunity to get motivated and get fit – and Tourmakeady is no different. 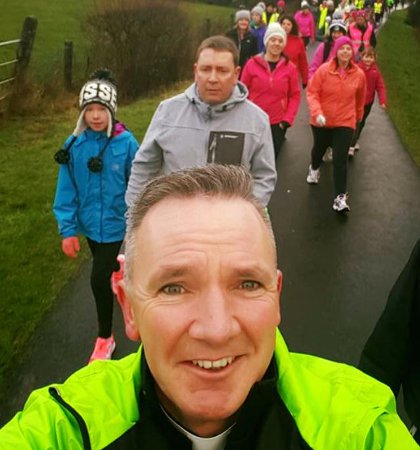 One of Fr Kenny's selfies from the walk

Each Monday, the group of 50 meets at the Tourmakeady GAA grounds, where the walk and run begins.

During the week, they take part in classes of Pilates or Zumba, depending on the group’s interest – and then they come back together the next Monday for “weigh in and pray in”.

“When the group arrives each week everyone weighs in to check their progress and then I lead a prayer,” he said.

When RTÉ heard about Fr Kenny’s weekly ritual with his fitness group, they came down to visit.

“I suppose they liked the idea of it,” he said.

“We did a park and walk system for Mass the other week, where everyone parked a bit away from the church and walked up to get a bit of extra exercise in, so we are constantly on the move now.”

The group has so far seen massive success – with a collective weight loss of almost 10 stone the first week.

“The first week is always the easiest,” Fr Kenny laughed. “So we just need to keep the momentum now.”

One Priest on a mission in Co. MayoThis parish prays together and weighs together! Well done Fr Trendy!